This organism has no common names.

***NOTE: Due to the lack of literature and description of the order Julida, this page will focus primarily on class Diplopoda as a whole, but with some information about the order Julida. (Denoted by *)

Diagnostic Characteristics
*This organism was first characterized as a diplopod based on its possession of two pairs of walking legs on each segment2. Its many segments also helped in discerning its identity. This classification was narrowed down to the order Julida in looking at the organism’s first legs, seventh segment and cylindrical shape5. Its first set of legs appeared larger and thicker. This is because males of the order Julida posses their gonopods on this body segment4, 5.  The seventh segment of the millipede has modifications that denote copulatory organs, which are also definitive of the order Julida. The very small size of this specimen also aided in its classification, because Julida millipedes are some of the smallest of the cylindrically shaped millipedes in North America. Millipedes of the family Parajulidae are the only members of order Julida known to inhabit Minnesota, as well. With that, the collection site allowed the taxonomy to be classified down to the family level8.
Although millipedes of the order Julida, family Parajulidae are the most common millipedes in the Western Hemisphere, there is very little literature on them, so the classification of this organism could only confidently be narrowed down to family5, 8.

Ecology
Millipedes generally live in habitats with lots of vegetation and damp soil so they can safely burrow during the day, as they are more active at night. These habitats include area under leaf litter, stones, and sometimes underneath the surface of the soil. However, some millipedes are known to live in drier habitats, like deserts or up in the canopies of trees4. Certain millipedes have been found inside of dead and decaying animals, but it is not known if they were seeking shelter or nutrition3, 4. Millipedes are seasonal organisms, and some hibernate through winter in giant colonies. In general, they are most abundant in fall and spring due to better weather conditions1.
Millipedes are recognized as detritovores, meaning they feed on decaying material. They usually feed on decaying plant material on the floor of vegetation rich habitats. These animals prefer plant matter high in calcium content that has been decaying for quite some time. In addition to being detritovores, millipedes also obligate coprophages. This means they can survive for a short amount of time by feeding on their own feces. Millipedes also serve a very important role for the soil content in their habitats. When they break up the decaying leaf matter, they increase the surface area that the decaying matter covers, thus spreading out potential nutrients. Scientist F. H. Colville once said that millipedes, in a given environment, have the ability to make about two tons of fertilizer per acre per year1. This shows how millipedes can contribute to their habitats by making the soil more nutrient rich, so plants have the potential to grow more.
Millipedes exhibit many interactions with other organisms, including suffering from parasitism. Diplopods in some areas of Australia are subject to mite infestation. However these mites use the millipedes as a means of transportation, not nutrition1. Some millipedes are able to avoid some dangerous encounters with other organisms through their defense mechanisms of toxic chemical secretion. When they feel threatened, the secrete chemicals that are usually very foul smelling, in order to protect themselves and keep predators or parasites from attacking them1. This is a very valuable defense mechanism for their survival, but also comes at a high cost of energy in synthesizing the toxic chemicals.

Life History
Millipedes posses special reproductive organs inside of the segments above some of their legs. The actual location of the organs depends on the species. These organs, called gonopores, are referred to as secondary sexual organs when they are inside the second or third segments, and primary sexual organs when they are inside of the seventh segment. Before a male millipede mates, he needs to transfer his gonopore to his seventh segment. Female millipedes also have specialized gonopores, but for a more particular purpose. Females of each species of millipede have different gonopores in order to prevent hybridization between species1. Some females mate once per mating season, and others mate multiple times per season, depending on the species. Millipede reproduction relies on courtship before the female allows the male to mate with her. Fertilization occurs internally, and is generally accompanied by long periods of clasping shortly thereafter2. Once her eggs have been fertilized, a female burrows into the soil and creates an underground nest. Females lay between a few hundred and two thousand eggs, depending on their size and health1. Life after reproduction also varies greatly between species. Some live for up to a year after laying eggs, and others are semeparous, and die shortly after laying eggs1.
Juvenile millipedes hatch, stay in the nest for a short period of time, and then molt their first shell about twelve hours after birth1. Millipede development involves seven stages of growth. During each one of these stages the millipede re-molts its shell and adds segments. It generally takes about one year for millipedes complete the seven-stage cycle, and shortly after they become sexually mature2. It should be noted that larger tropical species might take up to ten years to become mature1. After reaching sexual maturity, millipedes stop growing and molting new shells. The life spans of millipedes vary from species to species, depending on size and environment, but in general, these organisms live for two to five years. However, some can live over ten years6, 7.

Distribution
There are about 10,000 species of identified millipedes that are widely distributed around the world today, except in polar regions6. Every continent has its own population of millipedes, excluding Antarctica8. Millipede species are locally distributed and often stay within a few square miles of their birthplace. Many genera are localized to one continent, as well2. Thus, many species of millipedes are endemic to their birthplaces. In comparison to temperate areas, there are more species of millipedes found in tropical areas, and these tropical millipedes can grow much larger, as well.
*Millipedes of the order Julida are widespread compared to other orders. Julida millipedes are usually only found in temperate areas. They are native to west Asia and Europe, but are also widespread in the Western Hemisphere. Millipedes of family Parajulidae are the most common millipede in North America, and have been found in habitats stretching from Alaska to the Atlantic Ocean, and from Canada to Guatamala8.

Voucher Information
This organism was collected at the Katherine Ordway Natural History Study Area located in Inver Grove Heights, Minnesota. It was collected under leaf litter directly adjacent to two trees. The habitat was very damp, and the specimen was found tightly coiled around a twig. Below are pictures of the collection site. 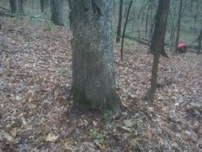 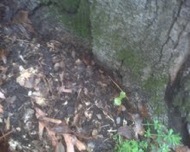