Diagnostic Characteristics
Thalictrum thalictroides is a low growing herbaceous plant that is usually four to nine inches tall (see Figure 1). Its stem and leaves are smooth, without fine hairs, and the leaves are ternately-compound, meaning each leaf is divided into three, and then into three once more, for a total of nine leaflets per leaf. The leaflets are round to ovular, each having three rounded lobes (see Figure 2). The leaves are sessile, branching from the base of the plant, and the leaflets have long stalks called petioles. Other leaves grow in a whorl around the flower base and are similar to the leaves that grow out of the base of the plant because of their sessile, long petioles. The roots of T. thalictroides are tuberous and grow in a cluster (see Figure 3).

The flowers of T. thalictroides grow in an umbel, meaning that the supporting stalk of each flower grows from a central stem that supports several flowers (see Figure 4). Within the genus Thalictrum, T. thalictroides is the only species that has its flowers arranged in an umbel.1 This characteristic is the reason for the plant’s continued placement in the genus Anemonella by some botanists.1 The plant’s flowers are white to pinkish, with 5-10 petal-like sepals. Within the subfamily Thalictroideae, Thalictrum is one of two genera that do not have petals.2 Historically, botanists and plant taxonomists thought that the ancestral Thalictroideae did not have petals, but recent research has provided evidence that the ancestral Thalictroideae had petals and they have been lost on two separate occasions – in the genera Thalictrum and Enemion.2The anthers are yellow (see Figures 3 and 4).

Ecology
Thalictrum thalictroides grows in eastern deciduous forests. As a ground cover species, it emerges from the leaf-covered ground in early spring and spreads along the forest floor. T. thalictroides is a member of the Ranunculaceae or Buttercup family, which is known for its complex chemical components in addition to its ornamental values.4 The varied chemical composition and time of emergence of members of this family contribute to the family’s connections with animals including being browsed by herbivorous animals like deer in the spring when little other food is available and being cultivated by humans for its medicinal and aesthetic properties.4 Specifically, T. thalictroides is known for its use by American Indians who made tea from the roots of the plant that and then consumed it for the treatment of diarrhea and vomiting.5 The roots have also been used as an experimental treatment for piles by physicians historically.5 T. thalictroides is also cultivated and hybridized by humans for its aesthetic properties.

Life History
Thalictrum thalictroides is a perennial, meaning that it grows from its root year after year for more than two years, and blooms from March to May.5 This species is called a spring ephemeral because it is one of the first plants to grow on the forest floor in early spring. In this manner, spring ephemerals take advantage of the readily available light before the leaves unfold on the trees, shading the understory. The plant blooms early in spring, sets seed, and then is dormant for the remainder of the growing season.3

Flowers are perfect, meaning that they have pistils, where the female gametophyte is produced, and stamens, where the male gametophyte is produced.6 Flowers are insect pollinated as evidenced by their colorful, attractive flowers. After fertilization, T. thalictroides produces dry capsules called achenes that enclose its seeds.7 The achenes are sessile and pointed at the tip becoming 4-6 inches long when mature.7

Distribution
Thalictrum thalictroides is found in deciduous forests throughout the eastern United States and southern Canada including New Hampshire and Massachusetts to Florida, Ontario, Minnesota and Kansas.

The conservation status of T. thalictroides in its native range is common, widespread, and abundant.8 In some states throughout its range, however, it is considered critically imperiled, including Florida, Maine, New Hampshire, Rhode Island, and Vermont, because it is very rare or because factors such as rapid decline have left its populations very vulnerable to extinction.8 The population of T. thalictroides in Minnesota has not been ranked.8 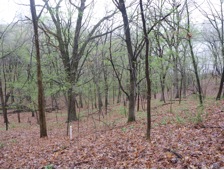