Diagnostic Characteristics
Weevils, or “snout beetles” are small, herbivorous beetles of the Curculionidae family.  Billbugs are the weevils belonging to the genus Sphenophorus.  Billbugs are 1/5” to 3/4” long and can be identified by the long, elephant-like bills that protrude from their heads which they use to bore into plants2.  Sphenophorus australis has creamy orange-colored stripes on its back that distinguish it from other billbugs1.

Ecology
Weevils are known primarily as pests for their behavior of laying eggs in the stems of plants and consequently feeding on the stems and later the crowns and roots of the plants after they hatch.  They can do extensive damage to plants like this and are a big issue for grass-growers4.

Life History
Weevils have a one-year life cycle.  After the larvae hatch from their eggs in June, they go through three to five growth stages, molting after each stage, and after a few weeks burrow into the soil, pupate, and emerge as adults in July3.  They overwinter in leaf litter starting in October and then emerge again in April or May, laying their eggs in late May.

Distribution
Billbugs can be found all over the United States and in parts of South America, Africa, Europe, and Asia.  Sphenophorus australis specifically has been spotted in California, Georgia, Illinois, Iowa, Maryland, Massachusetts, Michigan, Minnesota, New Jersey, South Dakota, and Texas1.

Voucher Information
This specimen was collected in a woodland area at the Katherine Ordway Natural History Study Area in Inver Grove Heights, Minnesota. 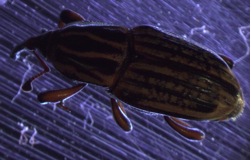 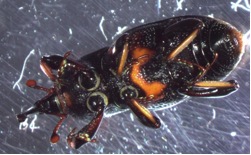 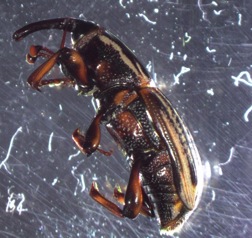