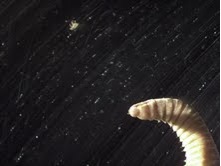 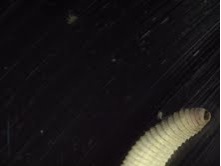 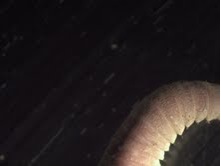 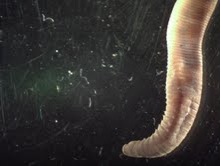 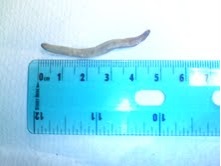 Worms are one of the most identifiable animals worldwide, but there are few diagnostic characteristics to consider. The most notable external feature is the segmentation of the body, which is clearly visible in Figures 1-4. The first section of the worm, the anterior section or head, consists of the mouth and the prostomium. The prostomium is a lobe that serves as a covering for the mouth and as a wedge to force open cracks in the soil into which the earthworm may crawl 1.  The anterior section of the worm is shown in Figure 1. Another key characteristic is the clitellum, or the collar-like structure near the front of worm’s body. The clitellum is used to distinguished adult worms from juvenile worms because it is a feature present only in adult worms 2. The collected specimen was lacking a clitellum and, therefore, must be a juvenile.
Another noticeable external feature of worms are the small hair-like structures, called setae or bristles, which are located on each segment. These can be extended or retracted and act as the principal function for movement 1. Setae are visible in Figures 1 and 3. Other essential features of worm anatomy are the various skin glands that secrete lubricating mucus, which aids movement through the earth and helps to stabilize burrows and casts 1. This is not visible in any of the Figures because the specimen was preserved in ethanol before photographing, but when it was collected it was actively secreting mucus and covered in the lubricating substance. Worms can range from a few millimeters long nearly a meter, but most common species are a 10-20 cm long 1.
The specific specimen identified is 4.8 centimeters (Figure5.). The body segmentation was visible when the specimen was collected and mucus was being actively secreted. After being preserved in ethanol, the setae were easily identifiable on each segment and the anterior and posterior sections were easily distinguished from one another. The worm changed color after being preserved in ethanol; when collected it was a brownish-pink and after being preserved in ethanol it had paled to a beige color.

Worms are found in the soil and leaf litter of every continent except Antarctica. The majority of temperate and many tropical soils support significant worm populations, while grasslands and temperate woodlands can support much larger populations of worms 3. In general, deciduous woodlands and orchard soils support the highest numbers, and temperate soils tend to support higher number than tropical soils. The amount of individual worms in any given square meter of soil (any soil type) from any given continent can range anywhere from zero to 800 worms 4.
Worm behavior varies according to temporal changes, climactic changes and species-specific behavior. Different species of worms prefer different habitats and live in different ways. Young and immature worms are usually found nearer the soil surface, with most adult worms being found in around 15cm of soil. Temperate worms live deeper in the soil during the winter when the surface of the soil is colder. In times of water shortage, some species will burrow deeper down into the soil seeking moisture while others, which are better at tolerating desiccation, remain nearer to the surface 4.
Worms are beneficial to their surroundings in some ways and interact with other members of the food web in their ecosystem. Worm castings are rich in all the minerals necessary for plant growth in a water soluble form that are immediately available for plant use. Worms improve the structure of the soil by bringing nutrients up to the surface layers of the soil from deeper down and they assist in the break down of organic matter in or on the surface of the soil 4.
Worms continuously interact with the environment and organisms around them. Worms derive their nutrition from fungi, bacteria and possibly protozoa and nematodes, and they promote the activity of these organisms by shredding and increasing the surface area of organic matter and making it more available to small organisms 3. Worms, thus, act as providers for smaller organisms. Worms influence other organisms that inhabit the soil because they alter the amount and distribution of organic matter and microbial populations 3.

Worms are hermaphroditic, meaning each worm contains both male and female sex organs. The male and female sex organs can produce sperm and egg respectively in each worm. Although worms are hermaphrodites, most need a mate to reproduce. During mating, two worms line up inverted from each other so sperm can be exchanged. Each worm has two sperm openings and two sperm receptacles, which take in sperm from another mate. The worms have a pair of ovaries that produce eggs. The clitellum will form a slime tube around it, which will fill with an albuminous fluid. The worm will move forward out of the slime tube. As the earthworm passes through the slime tube, the tube will pass over the female pore picking up eggs. The tube will continue to move down the worm and pass over the male pore called the spermatheca which has the stored sperm called the spermatozoa. The eggs will fertilize and the slime tube will close off as the worm moves completely out of the tube. The slime tube will form an “egg cocoon” and be put into the soil 5. The eggs will hatch after about 3 weeks. Each cocoon produces a range of two to twenty baby worms with an overall average of four baby worms per cocoon 1.

Worms are found on every continent in the world except Antarctica. They are indigenous to Europe, but are now abundant in North America and western Asia 6. This is most likely due to settlers bringing the worms to newly settled territories, which is how most non-native species first inhabit a completely new area.

This specimen was collected in a woodland area (Figure 6.) from the underside of an over-turned log at the Katherine Ordway Natural History Study Area in Inver Grove Heights, Minnesota. The specimen was in dark, moist soil amongst decaying leaves where the decayed log had been before being dislodged (Fig. 7. &8.).