A flower in the Carrot Family (Apiaceae)

Diagnostic Characteristics
The Apiacae family is composed of 300 genera and 3,000 species (Carr 2006), 35 of which have been found in Minnesota (MN DNR, 2002). My sample shares the strong smell, compound umbel pattern of small flowers clustered together, hollow steam, tuberous root, and subtly toothed leaves common in this family (Carr, 2006). The hollow stems of plants in this family contains oil tubes carrying scented oils. The flat topped flower clusters are referred to as umbels and in my sample are found in two clusters. The flowers in this family are usually white or yellow (Kramer, 2007). The flowers on my sample are white. These plants usually have a corolla composed of 5 petals arranged in a radially symmetrical manner. Additionally, the flowers usually also contain 5 stamen (Carr, 2006). I dried my sample before I tried to identify it, thus I forgot to count the number of petals and stamen to confirm that they share this morphology. Additionally, because I tried to identify using a dried sample, I was not able to see the bracts along the base of the inflorescence which are often used for identification. The leaves on flowers of the Apiacae family are usually alternately distributed or pinnately or palmately compound. Generally, these plants do not contain stipples. My leaves are divided into three leaflets at the tip of the steam and otherwise placed alternately, matching up with the common morphology. The leaves and plants of this family are generally much larger than my sample. However, there are a few species that bloom in the spring that are a smaller size.
Because of the small size of my flower and bloom date in early spring, I am lead to believe that it might be Ergenia bulbosa. This plant and my plant share the characteristic of a slightly reddish stem and white flowers. These flowers are usually 5-6 inches tall, about the size of the majority of the flowers I found. However, Ergenia bulbosa has long, dark stamen, which my sample lacks. In contrast my stamen were green, short, and blended into my petals. Ergenia bulbosa also has not been found in Minnesota, so it is not likely that it is the exact species I found (MN DNR, 2002).

Ecology
The Apiacae family is found mostly in temperate habitats, however there are a number of species that are found in the tropics. These plants can be found in wetland, forest, and field habitats, as well as open areas in an urban setting. My sample was found in the Oak Forest about 1/4 of a mile uphill from River Lake. The soil was moist, but the water was not standing. The canopy was a little sparse with about 1/4 coverage.
Flowers in this family have a number of methods of protecting themselves from predators. Many plants in the Apiaceae family have large stylopodium, the base of the style, the secrets nectar that attract certain insects. Moreover, the umbel is shaped in a way that allows larger insects to rest upon it to access the nectar. These insects will eat the herbivorous insects living on the plant. More over the fragrance of the plants overshadows insect pheromones, and other plant sent, deterring herbivorous insects from eating the plants. The benefits of these functions spread to other plants nearby. These plants are less likely to be fed upon because of the decrease in herbivorous insects in the area. Umbellifers are a type of companion pant for this reason (Chambers, 2009).

Life History
The life cycle of Apiaceae can be perennial, biennial, or annual, and very in growth pattern even within plant species depending of the soil moisture and the other habitat characteristics they are growing under (Downie, 2009). Biannual plants do not flower until the second spring. These plants develop their tap root and grow leaves during the first year. During the second year they flower, set seeds and die. Reproductive maturity occurs during this second year. Seeds germinate during the spring, summer, or fall depending on the species. They tend to grow quickly after they germinate in order to form the tap root. This tap root is used for nutrient storage and for secreting odorous substances (Lux et al., 1995). The Apiaceae family produces seeds that are either ribbed or winged for distribution by animals and wind, respectively. This fruit is formed as a achizocarp that is divided into two mericarps that contains oil tubes (Downie, 2009)
Plants in this family are usually reproductively hermaphroditic, but are sometimes andromonoecious, polyamomonoecious, or dioecious. They are pollination entomophilous and thus depend on insects for pollination. The umbel of these flowers tend to contain both male a famale flowers. Additionally the umbel shape makes it easy for a pollinator to land on the flowers to drink the nectar in the stylopodium.

Distribution
Apiaceae is found world wide, but mostly in northern temperate regions. Member of the family found in the tropics are mostly shrubs and trees, whereas in temperate regions they are found as wildflowers (Downie, 2009). The Umbelliferae family is most closely related to the Arelieae family, however the latter is much more common in tropical regions. Apiaceae species that grow in the tropics are found mostly in mountainous areas. In the United States the Unberriferae that grow along the pacific coast are found mostly in wetland habitats such as wet meadows and both fresh and salt water marshes. Species found in the interior of the United States are also found in wooded areas and more adapted to drier habitats (Mathias, 1990). 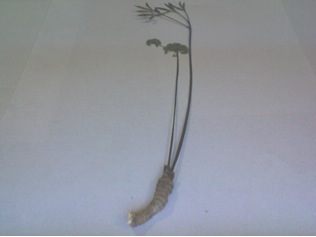 Figure 1: A picture of my dried sample. The leaves and flowers are found on two completely different stems. The flowers are greenish white and the steams are slightly red.  Closest to Harbinger of Spring (Erigenia bulbosa) because of size and time found, but has a slightly smaller umbel and may well be something different.

Chambers, Marilynn. 2009. Apiaceae (Parsley). From the Ground Up: A Gardening and Native     Plants Quarterly from Colardo State University Volume 1, Issue 5.