Once one of the most widely distributed frogs in the US, the Northern Leopard Frog was a common sight on high-school dissecting trays. They were also quite popular in the food industry as well, hunted and killed for their legs. 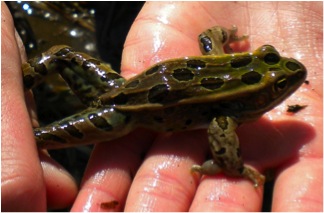 Identification
They are named for the three rows of irregularly shaped dark spots on their back and legs.1 Each spot is encircled by a lighter cream ring. They are greenish-brown in color with a pale underbelly and light colored ridges (dorsolateral folds) on either side of their backs. These ridges or folds run from the eye to the rump. They have pinkish patches on their feet with extensive webbing on their hind toes.2Their eyes are golden.  Measuring 3-5 inches (7.6-12.7 centimeters) from nose to rump they are considered medium-size. Females are slightly larger than males.
Tadpoles are dark-brown/grey with tan tales and light blotches on the underside. Their backs have flecks of light gold with higher concentrations on the sides. Tails are usually less than 1.5 times total body length. The dorsal tail fin is anterior to the tail when viewed laterally. The anus is on the right side in front of the fin. The eyes fall within the outline of the head when viewed from above. The lower mandible is thicker than the upper. Tadpoles usually measure between 5.5 to 10.0 centimeters.2

Diagnostic Characteristics
The distinctive spotting pattern of the Northern Leopard Frog is one easy way to distinguish it from other ranids (true frogs). Most noticeably, it has three rows of spots while others have only two and its distinctive darker spot rimmed by a lighter halo easily separates it from other species like the Columbia Spotted Frog or the American Bullfrog (which has no spotting).  The Northern Leopard Frog also has a lateral stripe on the side of its snout that is yellowish in color and absent in the American Bullfrog. Lack of reddish coloration on the belly and legs distinguishes it from the Columbian Spotted Frog.

Ecology
They tend to live in marshy areas, near ponds, in streams, rivers, valley bottom ponds, beaver stocks, potholes, lakes and warm water springs. Their habitats are mostly freshwater but some have been found in places with moderate salinity. During warmer months they will venture into well-covered grasslands.3 They are well adapted to the cold and can be found in slow moving streams up to 3000 meters above sea level.
They are carnivores, tending to eat anything that they can fit into their mouth. They lie in wait for prey, pouncing with their powerful back legs when the prey ventures across their path. They are known as opportunistic feeders, like many other amphibians.3 Their prey includes: beetles, ants, flies, worms, smaller frogs, including their own species, birds, and garter snakes. They are preyed upon by raccoons, snakes, other frogs and humans. They are fast and rely on speed to escape from predators. This makes them very difficult to catch as they can avoid predators by moving quickly performing a series of zigzag hops.  Tadpoles are preyed upon by a variety of creatures including: the Pied-billed Grebe, Tiger Salamander, garter snakes, and American Bullfrog tadpoles.
Northern Leopard Frogs tend to be the most active after sunset (in warm temperatures).  They go into hibernation during winter which can last from October to March or April depending on where the frog is, i.e. in Wyoming ice does not usually melt until April while in Colorado, ice melts by March. During winter they shelter under rocks in streams provided there is enough oxygen in the water.4 They have also been found inactive under rubble and debris in ponds/streams in water as deep as 85 centimeters.2

Life History
Their average life expectancy is 2-4 years. Males emit a snore-like call from spring to summer to attract a mate. The snore-like call lasts for 2-3 minutes and is followed by 2-3 stuttering croaks.2 The earliest known date for these frogs to come out of hibernation is March 1.3 During the mating season, males have a swollen thumb which aids in copulation. These frogs breed from March-June, when they emerge from hibernation. Exact timing depends on latitude. Males gather on warm days (14-230C) and float on the surface of the water attempting to attract females by their calls. They may gather together in groups as big as 25 individuals in a 20 square meter area. Females lay eggs soon after calling begins.
They breed in ponds or other stationary water sources, like a stagnant stream. They can lay up to about 6,500 eggs in the water at one time. The eggs can lie at the bottom of ponds, become attached to vegetation or clump together in flattened masses of 300-800 eggs measuring less than 6.0 millimeters across. The eggs are black on top and white on bottom. Eggs may reach from a few hundred per hectare to more than a thousand, depending on favorable conditions. Tadpoles usually hatch within ten days of laying and several hatchings can occur at one site.2 Tadpoles develop in the breeding pond within 4-5 months (58-105 days).4 Fully metamorphosed juveniles appear as early as June in lower elevations and as late as September in higher elevations. When they morph into frogs they resemble smaller versions of the adult only measuring 0.75-1.2 inches (2-3 centimeters). They will reach sexual maturity at about three years old.
During their life history they can be found in different habitats depending on what stage of their life history they are undergoing. For example, ponds used for breeding tend to be shallower and warmer, different than those used for wintering which maybe deeper. Juveniles and adults may venture out into marshy fields with dense, but short vegetation. Taller vegetation seems to not be as preferable.2

Distribution
They have a wide range covering most of the Northern United States except the Pacific coast. They range from the Northern-most parts of Maine, down into New Hampshire and New York, across the mid-West to Minnesota and further west to Montana. They can even range as far south as Arizona and parts of New Mexico. They are found in Canada as well along the southern Labrador coast and further inland from Quebec to the southern parts of Alberta. They were once one of the most commonly distributed frogs in the US, but suffered massive declines in the 1970’s in the US and Canada as well. Scientists are still trying to pinpoint the causes of this massive decline but have yet to determine the source. It is generally thought to be a combination of increasing water acidity, deforestation and pollution. They are now classified as ‘Threatened’.

Voucher Information
This specimen was collected at the Katherine Ordway Natural History Study Area in Inver Grove Heights, Minnesota. The specimen was found in a marshy area located in a small depression in the prairie grasslands. The area was wet with low lying vegetation.