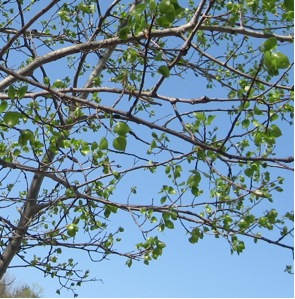 When identifying woody plant species, it is important to pay attention to the leaf morphology, the presence of flowers or lack thereof, the quality of the bark, and the height of the trunk. The leaves of the described specimen consist of petioles, simple laminae and stipules. The laminae are rounded and serrulated, with acute apex and secondary veins arranged in a palmatopinnate fashion1. Such leaves are a distinct feature of aspens. In addition, they are about 1 to 3 cm in diameter, indicating that they are neoleaves of a young poplar tree. Morphology of neoleaves is conserved among poplar trees, hence it is difficult to distinguish to which one of the 29 described Populus species this specimen belongs . The upper surface of the leaf is glabrous, and waxy. In contrast, the lower surface of the leaf is hairy, especially in the marginal area. The purpose of hairs could be to minimize extensive loss of water. The lower surface of the leaf is of paler shade of green compared to the upper one, probably due to greater abundance of chlorophyll in the cells of the palisade mesophyll layer proximal to upper epidermis. There are no visible flowers, since flowers in poplar trees arise before leaves do . The identified specimen has greenish to gray thin bark, also attributed to young poplar trees. In some aspens, the bark also carries out photosynthesis. Its trunk is about 2.5 meters tall, further implying that the specimen is juvenile, since the range of trunk heights for adult poplar trees is from 12 to 50 meters.

The trees of the genus Populus inhabit temperate zones of the northern hemisphere. They can be found in agricultural as well as in urban areas, in natural forests, and riparian zones1, . They are able to survive temperature fluctuations between the seasons. Individuals belonging to this genus are of immense ecological importance, as they represent vegetational pioneers – the first plants to repopulate an area that has been affected by fire or another harsh environmental factor. Moreover, trees of the genus Populus host numerous insects belonging to the order Lepidoptera, and develop symbiotic relationships with fungi3.

Poplar trees grow very rapidly, and because of this convenient feature, they are used for restoring the biodiversity of endangered riparian zones. They play an important role in maintaining water and carbon cycles in their eco-systems, since they develop an extensive root system and carry out photosynthesis . Thus, they set the basis for trophic interactions at multiple levels.

Aspens as well as other poplar trees are hosts to innumerable herbivorous insects, some of which are monophagous (e.g. Bucculatrix staintonella), while others are polyphagous (e.g. Lymantria dispar) . A recent study carried out in Bulgaria uncovered 18 new lepidopteran phytophages feeding on the poplar trees . This finding illustrates how incredibly diverse the lepidopterans are, and how little we still know about global biodiversity.
Poplar trees establish symbiotic relationships with soil fungi (ectomycorrhizae). The fungus provides the tree with nitrogen, phosphorus and water, while getting sugars and shelter in return. In year 2008, scientists sequenced the genome of a fungus Laccaria bicolor, which lives in close association with the poplars. They were able to target some of the genes regulating rhizosphere colonization, thus starting to uncover the underlying molecular mechanism of symbiosis .

Not all fungi develop symbiotic relationships with poplar trees. The poplar leaf rust Melamspora laricis is one of the most prominent pathogens affecting the poplars, thus harming bioremediation. The genome of this fungus has been partially sequenced, for the purposes of revealing the genetic material guiding its pathogenicity3, .

All 29 species of the genus Populus encompass dioecious individuals, which can reproduce both sexually and asexually. Sexual reproduction mechanism in these plants is identical to that of other angiosperms. Asexual reproduction involves the formation and spread of underground shoots (soboles). Aspen trees can live up to 150 years, and can reach sexual maturity no sooner than the 10th or 15th year of their lives1.

Aspens mostly reproduce vegetatively. They extend their roots and soboles substantially, especially after an environmental disturbance such as fire. The ramets have been recorded growing as far as 40 meters away from the parent aspen tree. Since the root system is so large, it is able to absorb water and nutrients from the soil, thus ensuring rapid growth of the ramets. As the ramets grow, they remain connected with each other and with the parent tree via the root system. All the interconnected trees are referred to as a clone, since they are all essentially the same individual. Interestingly, aspen roots can survive underground for a long time after parent tree had died. The researchers came to this conclusion as they saw developing ramets in areas with no adult aspen trees2.

Aspens are widely distributed across the northern hemisphere, in Europe, Asia and North America. Their natural range in North America encompasses most of the territory of the United States of America, as well as mountain ranges of Mexico. This wide geographical range testifies about the adaptability of the aspen trees to environments that differ in the extent of temperate character . 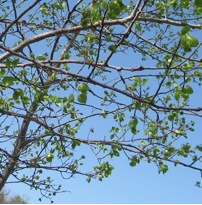 Small, waxy leaves of the specimen. 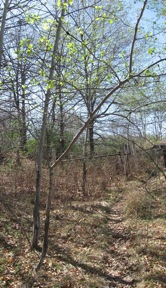 The specimen was found at the outskirts of a forest at the Ordway Natural History Study Area. It resides close to shrubs and other lower woody plants.

Information obtained from:
http://www.treesforlife.org.uk/tfl.aspen.html
[Accessed May 2010]

Information obtained from:
http://populuscenter.org/index.php?option=com_content&view=article&id=70&Itemid=91
[Accessed May 2010]

Information obtained from:
http://populuscenter.org/index.php?option=com_content&view=article&id=67&Itemid=68
[Accessed May 2010]

Information obtained from:
http://genome.jgi-psf.org/Mellp1/Mellp1.home.html
[Accessed May 2010]

Information obtained from:
http://forestry.about.com/od/hardwoods/ss/aspen_3.htm
[Accessed May 2010]