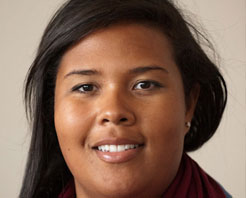 Jamila Humphrie ’11, a double major in Hispanic Studies and Political Science, will spend up to 25 hours each week assisting an English as a Foreign Language teacher at a University or Binational Center in Brazil. When she is not in the classroom she hopes to explore through an oral history project how race and ethnicity have impacted the school system, classrooms and teacher’s experiences in Brazil.

Awarded to the outstanding student or students majoring in Political Science whose careers exemplify the highest standards of scholarship and education for service to society.

Awarded to the students majoring in Political Science who have demonstrated, by working with underprivileged, humanitarian concern and commitment.

Awarded to Political Science majors who have had debate and speech experience and have been active in College and community affairs.

This Award honors the graduating Political Science major who best exemplifies the values of “Academic Excellence.

Award for Excellence in Scholarly Writing:

This award honors the graduating Political Science major who has submitted the best essay or honors thesis in the preceding academic year.