Professor Andrew Latham and student Audun Sundeen Religious Studies minor ’22 co-authored this piece about how the war in Ukraine is reshaping the geopolitical situation for Central Asian countries.

The love story of Mac alum Frankie Sandmel ’13 was the subject of this article. 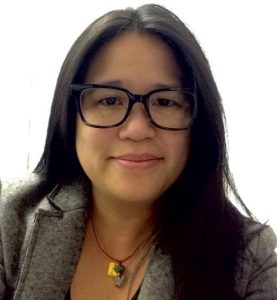 “Dr. Alina Wong is an accomplished diversity, equity, and inclusion expert, who was previously employed at Macalester, and has a broad background at small liberal arts colleges and research 1-level universities,” said Professor William Hart, Religious Studies department chair and VP for DEI search committee chair. “She brings a wealth of experience, talent, and insight to the difficult and important work of DEI. I look forward to working with Dr. Wong and her staff.”

“I feel like I’m coming full circle – I started my student affairs career at Macalester and so much of what I learned about diversity, equity, and inclusion on a college campus I learned at Mac,” said Dr. Wong. “I love to think about how we connect our learning with our action. Not only are we impacting the current landscape, but we’re impacting the future as well. What excites me about Macalester is the commitment demonstrated by faculty, staff, and students to anti-racism, equity, and justice, to transform not only Macalester, but also to take what we learn to build coalitions and movements for social justice. I am eager to build collaborative partnerships across the college and with alumni. It’s going to be hard work, and I’m looking forward to joining a visionary team of staff, faculty, students, activists, and scholars with a clear mission and shared principles.” 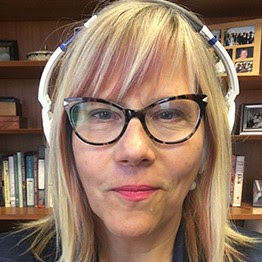 During Reunion 2021, Amy Hagstrom Miller (Religious Studies ’89) was awarded the Distinguished Citizen Award. “Amy Hagstrom Miller ’89 is a woman of exceptional courage and determination,” writes her nominator. “She has what we call it in Texas, grit.” In 2016, that grit brought Hagstrom Miller all the way to the Supreme Court. Her clinics were the lead plaintiff in the most critical abortion rights decision in a generation, taking on onerous regulations around abortion in Texas. Her win created a legal standard that has helped secure and preserve access to abortion around the country. 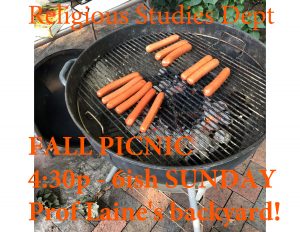 Kat Lewis ’21 Honors Presentation “Tale of Two Judiths: Queering the Book of Judith with the works of Judith Butler” 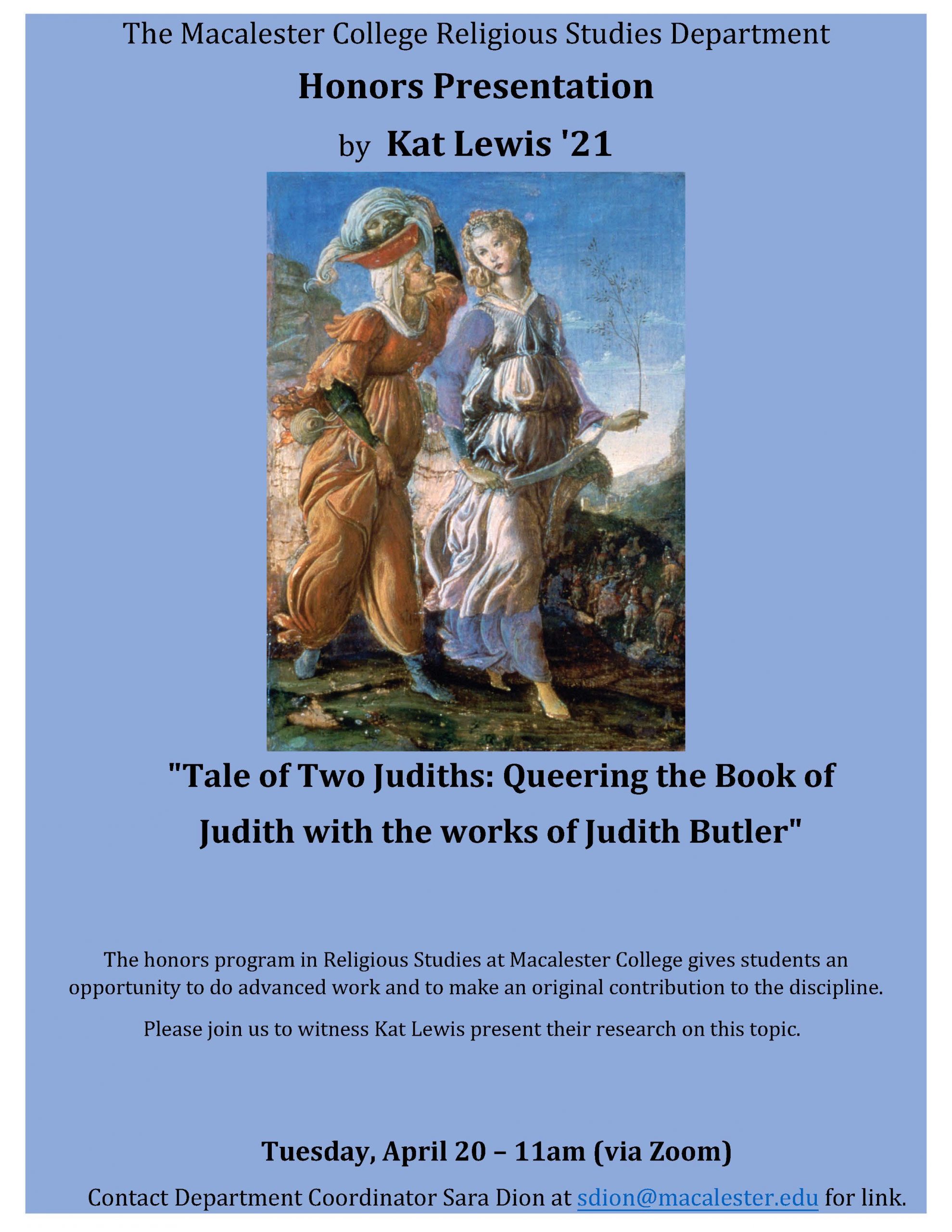 On April 20 at 11am senior Kat Lewis will defend their honors thesis, “Tale of Two Judiths:Queering the Book of Judith with the works of Judith Butler” via Zoom. Please contact department coordinator Sara Dion at sdion@macalester.edu for Zoom link.

Sofie Freedman ’21 Roetzel Presentation “Punishment, Divine Justice, and Incarceration: Tracing the Impact of Protestant Christianity from Enlightenment to the Present” 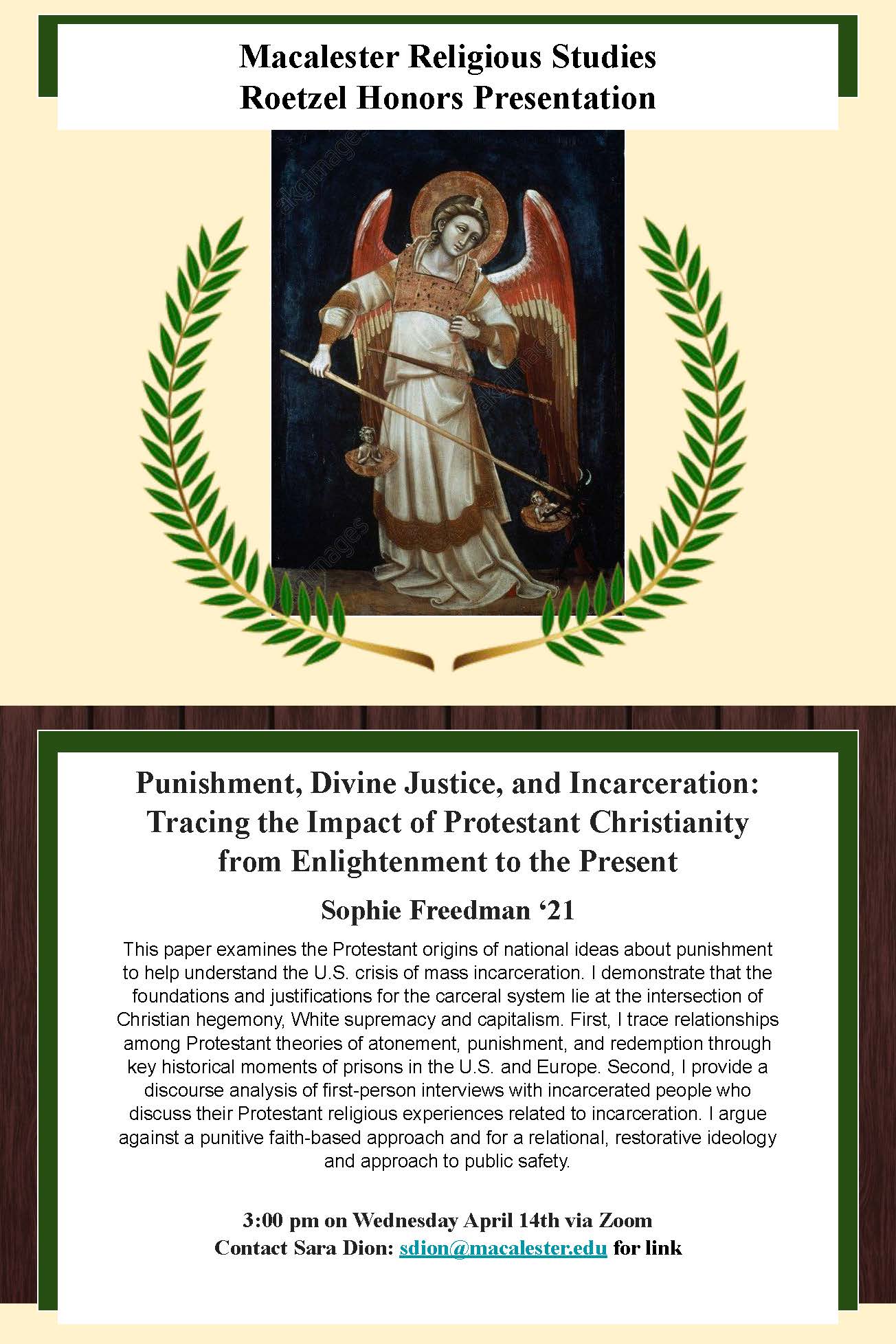 Wednesday April 14 at 3:00pm senior Sofie Freedman will defend her honors thesis, “Punishment, Divine Justice, and Incarceration: Tracing the Impact of Protestant Christianity from Enlightenment to the Present” via Zoom. Freedman is the recipient of the Roetzel Prize for the 2020 – 2021 academic year. Please contact department coordinator Sara Dion at sdion@macalester.edu for Zoom link.

Sofie examines the Protestant origins of national ideas about punishment to help understand the U.S. crisis of mass incarceration and will demonstrate that the foundations and justifications for the carceral system lie at the intersection of Christian hegemony, White supremacy and capitalism. First, she traces relationships among Protestant theories of atonement, punishment, and redemption through key historical moments of prisons in the U.S. and Europe. Second, she provides a discourse analysis of first-person interviews with incarcerated people who discuss their Protestant religious experiences related to incarceration. Freedman argues against a punitive faith-based approach and for a relational, restorative ideology and approach to public safety. 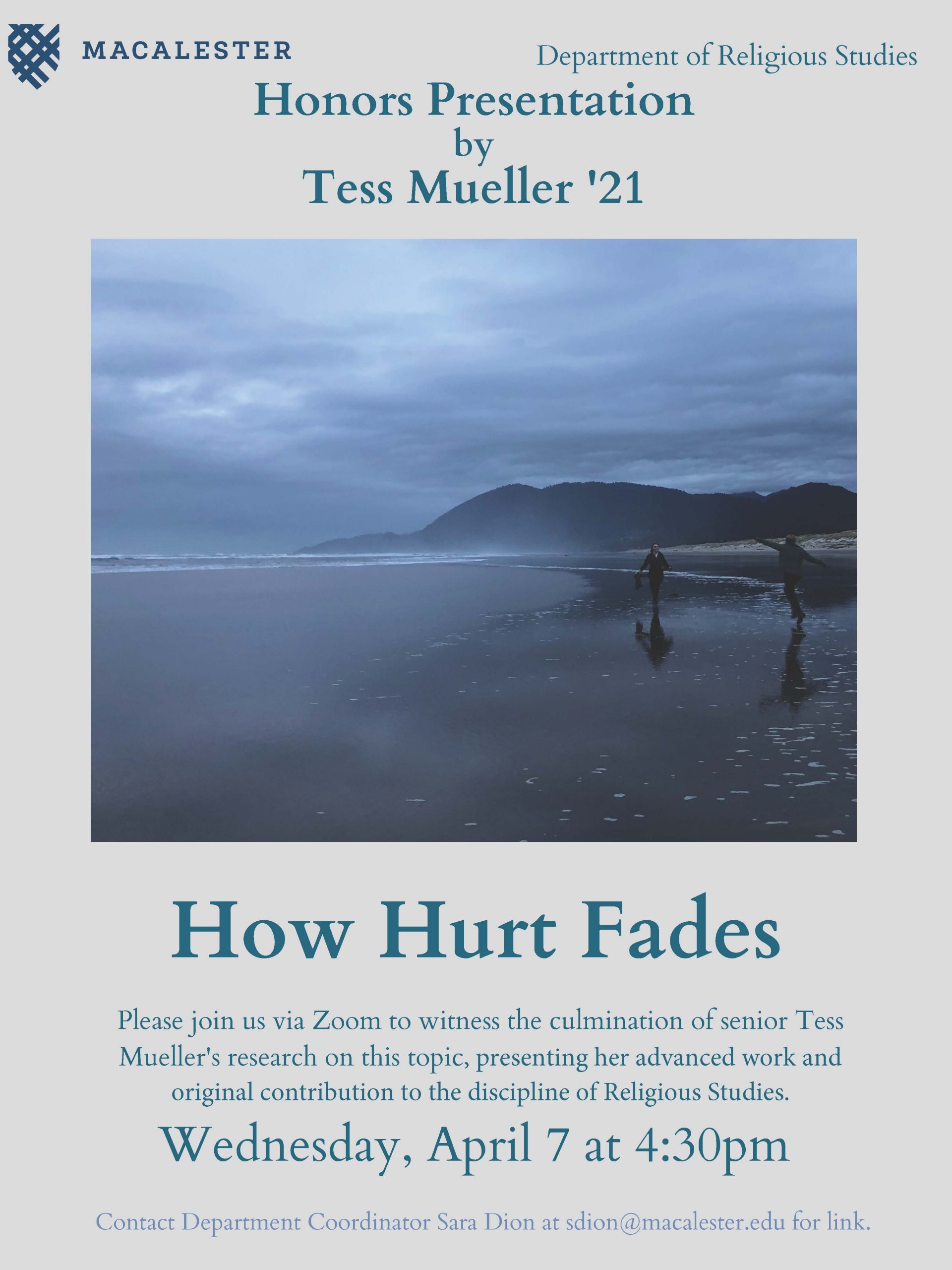 WUNC | Creating Connection In A Time Of Social Distancing: Your Coronavirus Stories

Kate Bowler ’02, associate professor at Duke Divinity School and host of the podcast “Everything Happens,” joins “The State of Things” to discuss how North Carolinians are are responding to the COVID-19 situation. 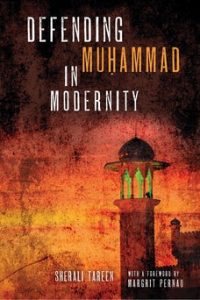 SherAli Tareen ’05, associate professor of religious studies at Franklin and Marshall College, is the author of “Defending Muhammad in Modernity.”

In collaboration with the History and Spanish and Portuguese Departments the Religious Studies Department is sponsoring two dynamic individuals at a mini-symposium Sunday, March 8, at 4 p.m. in Arts Commons 102. The speaking engagement is titled “Of Blasphemy and Miracles: New Approaches to Old Catholic Puzzles.”

University of San Francisco Professor Katrina Olds’s work focuses on early modern Spanish history. Her research interests include popular culture and religion; Counter-Reformation history and hagiography; the history of the book; and religious and intellectual exchange in Spain and the Americas. She is a Macalester alum, and when she was at Macalester, she concentrated in Religious Studies and Spanish, wrote an honors thesis on the Virgin of Guadalupe, and studied abroad in the Dominican Republic, where she learned to speak Spanish, got to see the pope (from very far away), and became fascinated with popular Catholicism.

Professor Karin Vélez is a member of the faculty of Macalester College. She received her doctorate from the History Department of Princeton University and her research interests  include the history of the Atlantic World, early Modern Iberian and French empires, and popular religion. She has received several awards for her recently published book “​The Miraculous Flying House of Loreto: Spreading Catholicism in the Early Modern World.” 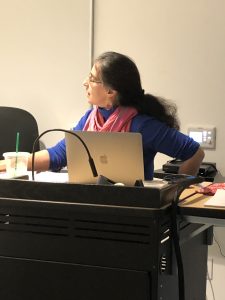 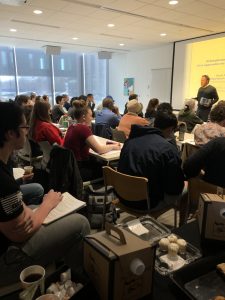 Washington Post | We are not divine. But we are loved. That is enough.

Kate Bowler ’02 is associate professor of the history of Christianity at Duke University. She wrote this opinion.  Washington Post Opinion Article 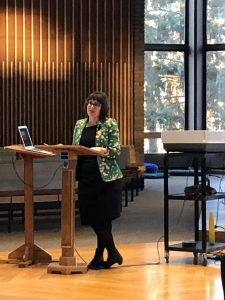 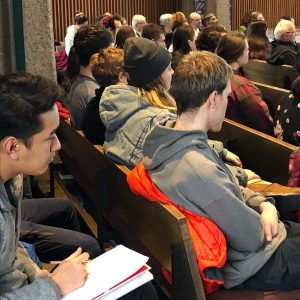 November Talk: “Transitional Justice: Transition to What and Justice for Whom?” 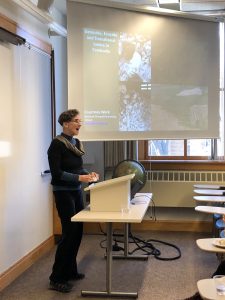 In November, anthropologist Courtney Work visited campus to talk about transitional justice in Cambodia, via the Extraordinary Chambers of the Courts of Cambodia (ECCC), also called the “Khmer Rouge Tribunals.” Much has been promised and expected on the basis of these trials, one case of which ended November 2018 in convictions for Genocide, War Crimes, and Crimes Against Humanity, for two senior leaders of the Khmer Rouge.  Dr. Courtney Work is an anthropologist who has spent years working at the nexus of environmental studies, including community-based patrols against illegal logging and forest destruction. Her presentation is on the notion of “transitional justice” as it has been deployed in Cambodia, and the relevance or irrelevance of the implementations of transitional justice to everyday Cambodians, and to the crashing environmental damage that is being done: the damming of the Mekong River upstream has resulted this year, for instance, in “empty” rivers during the agricultural season in Cambodia, pits to mine sand for construction – largely in Singapore and Malaysia, thus far – are causing major disruption across the country, and deforestation continues apace. 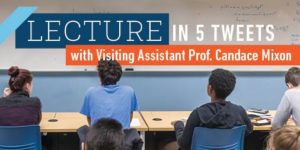 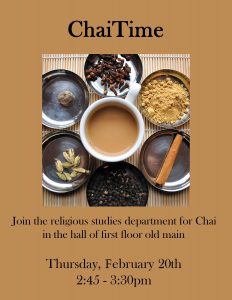 On monthly Thursdays throughout the spring, the Religious Studies Department faculty and students will come together for conversation, camaraderie, cookies, and chai from 2:45-3:30 p.m. in the hall of first floor Old Main. 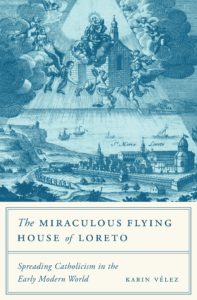 History Professor Karin Vélez‘s book, The Miraculous Flying House of Loreto: Spreading Catholicism in the Early Modern World, has received the American Academy of Religion’s (AAR) 2019 award for the Best First Book in the History of Religions.

The AAR wrote: “A work of engaging and deeply imaginative scholarship, Karin Vélez‘s monograph analyzes not simply the most improbable devotion in early modern Europe—the cult of the “flying” house of Loreto—but offers a compelling new account of the popular globalization of post-Tridentine Catholicism. Rich with imagery and insight and studded with fascinating ethnographic nuggets, it is a book that rewards multiple readings.”

This annual competition recognizes new scholarly publications that make significant contributions to the study of religion. The awards honor books of distinctive originality, intelligence, creativity, and importance—books that affect decisively how religion is examined, understood, and interpreted. 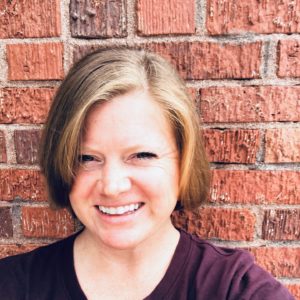 This year, we are excited to welcome Visiting Assistant Professor in Islamic Studies Candace Mixon to the Religious Studies department. She teaches introductory and intermediate level courses in Islamic studies at Macalester that include the study of race, material culture, and gender and sexuality studies. She received a B.A. from Vanderbilt University (2008), a Master of Arts in Islamic Studies from McGill University (2011), and she will receive her Ph.D. from the University of North Carolina at Chapel Hill in Fall 2019. She has traveled to Iran and Turkey for her current research on contemporary Iranian devotional practices, and her work has been supported by the American Institute of Iranian Studies, the Roshan Cultural Heritage Foundation, and the American Academy of Religion, among others.  Her research interests include contemporary Iran, art and material culture in Islamic studies, and gender in Islam. 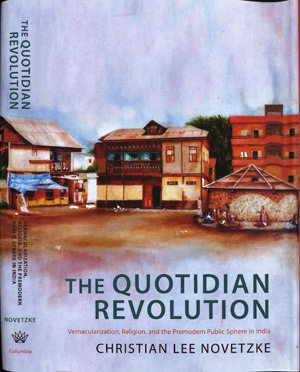 A new book, The Quotidian Revolution – Vernacularization, Religion, and the Premodern Public Sphere in India by Christian Lee Novetzke ’93, was published by Columbia University press in 2016. Novetzke is professor of religious studies, South Asia studies, and global studies at the University of Washington. 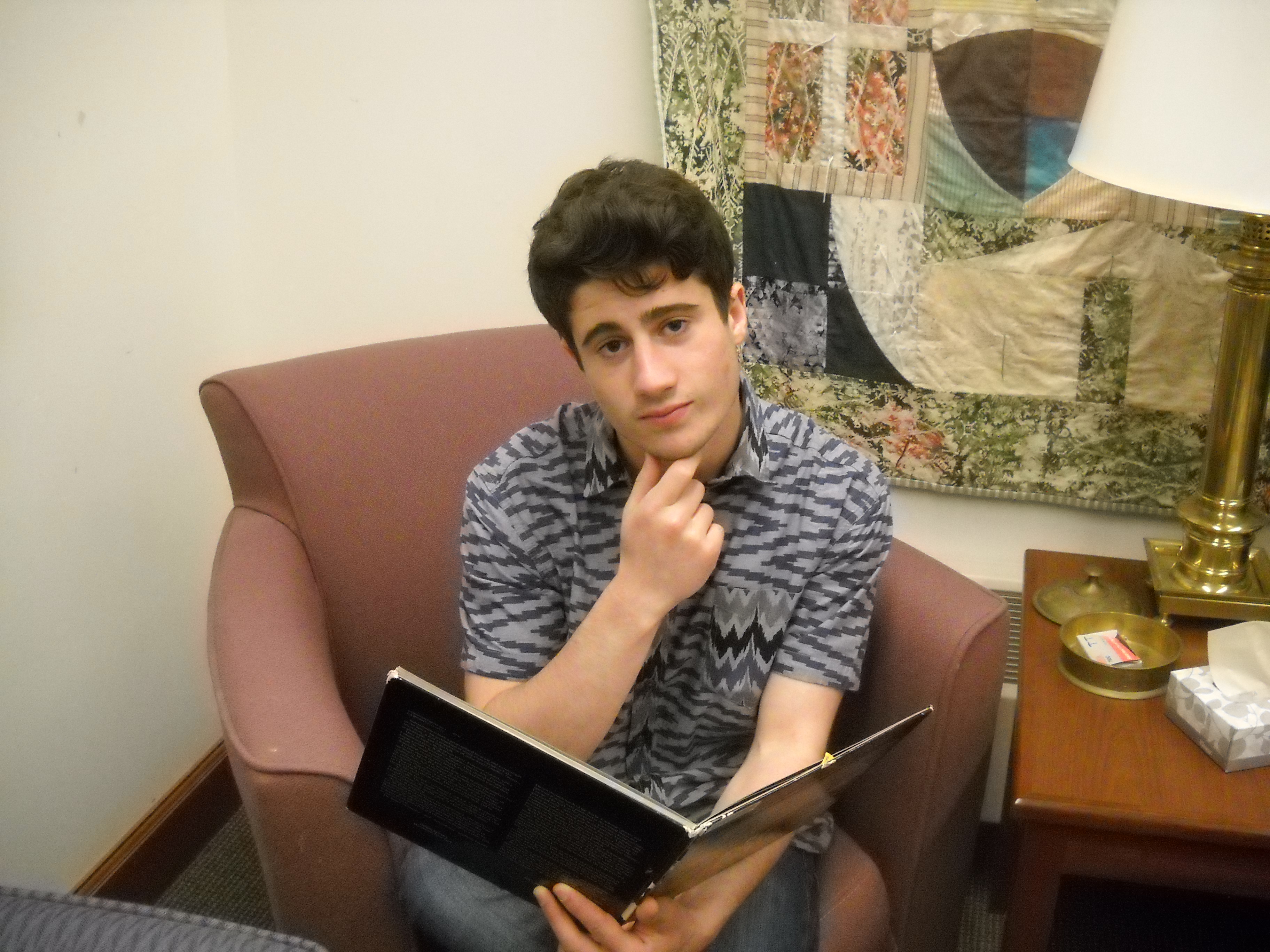