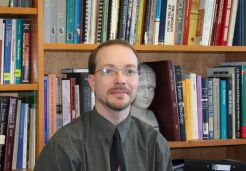 Professor Scott Legge is a biological anthropologist with research interests in human and non-human primate skeletal biology as well as areas of growth and development in both skeletal and living populations. Specifically, he has conducted research into vertebral pathologies in skeletal collections of native Alaskans and pathological conditions of the skeleton in great apes and Old World monkeys. Additionally, his research into the developmental processes of skeletal maturation in subadults resulted in a method for the estimation of the age of puberty in skeletal populations based on epiphyseal fusion of those bones known to fuse at or near the time of puberty.

Professor Legge’s Ph.D. research included the examination of vertebral pathologies in skeletal collections from Golovin Bay and Nunivak Island, Alaska. He examined the patterns of the pathological conditions and analyzed them with regard to traditional subsistence resource strategies for two different geographic regions within Alaska. He also compared the patterns observed with published data from other geographic regions, both within and outside of the Arctic.

For more information, go to this link:
Works.Bepress.Com/Scott_legge/