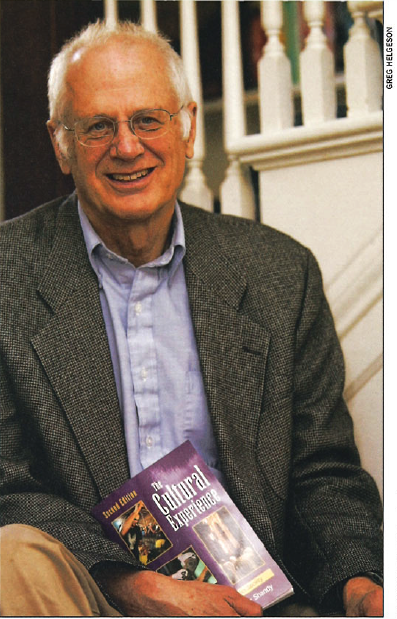 Established to honor Professor Emeritus David W. McCurdy, who founded Macalester’s Anthropology Department in 1976, this annual lecture brings to campus leading scholars in all areas of anthropology. McCurdy is the author of numerous textbooks for teaching both cultural anthropology as well as anthropological methods, including the widely used Conformity and Conflict, now in its 15th edition. He is a renowned teacher and was made the subject of an article in 1977 by Change Magazine for innovative teaching in anthropology. He was the recipient of the Macalester Distinguished Teaching Award in 1995, and in 1997, he received the first teaching award given by the American Anthropological Association.  History of Professor Emeritus David W. McCurdy from the 2016 event slide deck (PDF)

Video of 2021 McCurdy Distinguished Anthropology Lecture on “Breaking anthropology open: art, science and the vibrational possibilities of ethnographic un-disciplining,” by anthropologist Dr. Duana Fullwiley, Stanford University. The relationship between ethnography and art hinges on our human desire to recount the stories that bind us. But can we go deeper into new openings that others guide us to see? What are the ethical stakes of withering our attachments to a rigid self/subject bolstered by a discipline, as an act of undisciplining? Using scenes, questions and field notes as well as the artistic exhibit and the poem, Dr. Fullwiley will share how the back-and-forth of an anthropological approach stimulates conceptual openings with the potential to both unsettle and ground us in new ways.

Video of 2020 McCurdy Distinguished Anthropology Lecture on “Transgender Experience in the U.S.: Understanding Stigma, Stress, and Biologies of Resilience,” by anthropologist Dr. L. Zachary DuBois, University of Oregon.  Although trans, gender diverse, and gender non-binary people are increasingly visible in U.S. popular culture, political backlash and entrenchment in a gender binary continue to contribute to enacted stigma and violence. This talk examines trans experience through a biocultural lens focusing on how stress and stigma become embodied and explores ways forward to understand trans lives and “biologies of resilience.” View the slides for this presentation.

Video of 2019 McCurdy Distinguished Anthropology Lecture on “Why Immigration Reform Is So Difficult,” by anthropologist Leo Chavez of University of California–Irvine.This talk examines what complicates agreement on immigration reform, including why people migrate, demand for immigrant labor, effect of population growth and birth rates, fear of “the browning of America,” and pervasiveness of the Latino threat narrative, which characterizes Latinos as criminals, unable to assimilate, an economic drag on the economy, and “anchor babies.”

Video of 2018 lecture by Dr. Erin Vogel, Rutgers University, titled, “Nutrition and Health in Wild Bornean Orangutans: Insights into the evolution of obesity in humans,”  with introduction by Scott Legge, Associate Professor and Chair.   Dr. Erin Vogel’s research covers a broad array of topics about how primates are able to acquire food for survival. As a primate dietary ecologist, she’s interested in food acquisition and diet selection in non-human primates. In particular, she studies how primates have adapted to maximize energy intake in the face of variable environments by examining the behavior, morphology, and physiology of study animals within an ecological context.