Establishment of protected areas (PA) has been one of the leading tools toward biodiversity conservation. Globally, these kinds of conservation interventions have given rise to increase in PAs as well as the need to empirically evaluate the impact of these PAs on forest cover. Few of these empirical evaluations have been geared towards comparison of pre and post policy intervention landscape. This paper provides a method to empirically evaluate such pre and post policy interventions by using a cellular automata-Markov model. This method is tested using remotely sensed data of Bannerghatta National park (BNP) and its surrounding, which have experienced various national level policy interventions (Indian National Forest Policy of 1988) and rapid land cover change between 1973 and 2007. The model constructs a hypothetical land cover scenario of BNP and its surroundings (1999 and 2007) in the absence of any policy intervention when in reality there has been a significant potential policy intervention effect. Results not only show the implication of national level policy changes on forest cover but also show the usefulness of our method in evaluating such conservation efforts.

Bill McKibbin’s presentation will focus on the current state of climate science and what it means about the necessary scale and pace of our efforts to do something about global warming.  In particular, he will talk about the lead role colleges can play now that fossil fuel divestment has become the hottest student movement in several decades.

Bill McKibben,scholar in residence in Environmental Studies at Middlebury College, is the author of a dozen books about the environment, beginning with The End of Nature in 1989, which is regarded as the first book for a general audience on climate change. He is a founder of the grassroots climate campaign 350.org, which has coordinated 15,000 rallies in 189 countries since 2009. In 2011 he was elected a fellow of the American Academy of Arts and Sciences.

Emily Schilling received her B.A. from Colgate University in Hamilton, NY, where she majored in Biology and French. After teaching in France on a Fulbright Teaching Assistantship, she worked at the Center for Biodiversity and Conservation at the American Museum of Natural History in New York City. She went on to get her M.S. and Ph.D. in Ecology and Environmental Science from the University of Maine in Orono. Emily recently started teaching at Macalester.

What is the EcoHouse?  Find out about our own Eco-Living/Learning Laboratory.  EcoHouse students will talk about the house and their projects.  This is an excellent opportunity for EcoHouse applicants to learn more about living in the house from current residents.

“The Roots of the Real Christmas Tree:  The Production of Space and Meaning in Twentieth Century America”
Speaker:  Neil Prendergast, Univ. of WI – Stevens Point

For many Americans, the choice to buy a real Christmas tree is also a decision to select authenticity over artificiality. A ‘real’ Christmas tree, in the minds of many, is a biological tree, a tree grown from a seed, a tree that smells like the woods. It is the opposite of an ‘artificial’ tree made from plastic and aluminum. You know this. This framework is the most common for thinking about how Christmas trees might be connected to nature or even be nature. This lens of authenticity, though, is a relatively recent development, dating back only to the mid-twentieth century, a time when another lens for thinking about nature’s place at Christmas was waning. That lens was conservation. In the early twentieth century, prominent conservationists such as J. Sterling Morton, the founder of Arbor Day, decried the cutting of trees for Christmas, arguing that cutting wasted future timber supplies. For decades, conservation-minded Americans attempted a variety of solutions to this perceived problem. Not until the success of tree farms in the 1950s did they find their answer. As this talk aims to show, tree farming as both an idea and a practice helped shift the public conversation about Christmas trees from conservation to authenticity. In exploring this shift, the talk unearths connections between how Americans produce space and cultivate meaning—connections long buried, but that nonetheless lie at the roots of the ‘real’ Christmas tree.

Because of the complexity of the environmental challenges facing us today, interdisciplinary approaches are often required to obtain a better understanding the consequences of global change.  In his research, Daniel merges ecosystem ecology, community ecology, and the earth sciences to understand the how changes in biological community structure affect the transport of materials through ecosystems and landscapes.  In this talk, he will present three vignettes that present research on this theme.  The first will describe the how a single species plays a keystone role in delivering groundwater from aquifers to above-ground food webs in dryland floodplains.  The second and third will discuss how multiple species can interact to affect the flow of energy between aquatic and terrestrial habitats, as well as sediment erosion in streams.  In sum these research projects highlight the complex interactions that link habitats with their communities and have strong implications for the consequences of global environmental change. 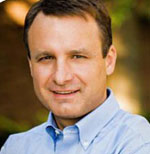 “Can We Feed a Growing World and Sustain the Global Environment”
Speaker:  Jonathan Foley, Director, Institute on the Environment, University of MN

Increasing population and wealth, along with changing patterns of diet and consumption, are placing unprecedented demands on the world’s agriculture and natural resources. Today, approximately a billion people are chronically malnourished, even as our agricultural systems are degrading land, water, biodiversity and climate on a global scale.  To meet the world’s future food security and sustainability needs, global food production must grow substantially while, at the same time, agriculture’s environmental footprint must shrink dramatically. I will present possible solutions to this dilemma, showing that tremendous progress could be made by halting agricultural expansion, closing ‘yield gaps’ on underperforming lands, increasing cropping efficiency, shifting diets and reducing waste. Together, these strategies could double the world’s food production while greatly reducing the environmental impacts of agriculture.

Sponsored by the Institute for Global Citizenship, Geography and Environmental Studies Departments.

Research suggests that climate change has significantly affected global environments, and that the current warming trend will continue.  Arctic environments, as particularly sensitive places to climate change, are a critical area to study. In order to quantify climate change in Arctic places, glaciologists and glacial hydrologists study the complicated dynamics of glaciers in the rapidly changing polar areas of the globe. Building off of previous work, this presentation will investigate the water discharge and suspended sediment flux patterns in a proglacial meltwater stream flowing from a glacier in Spitsbergen, Svalbard to characterize sediment storage in the proglacial system.  Suspended sediment yield changes act as sensitive indicators to monitor interactions between the glacier, climate, and landscape. This work will use statistical methods to provide a framework with which to qualitatively and quantitatively describe subseasonal forcings behind glacier melt and glacial denudation rates, and will contribute to continuing research on the Arctic’s responses to climate change.

“Oration of the Feces: Conflicting Discourses of Participatory Post-Development in Community-Led Total Sanitation” by Shaina Kasper ’13

The development community perceives the lack of toilets, freshwater sources, and hand washing stations as a public health issue – a “sanitation crisis” – to remedy with water, sanitation and hygiene initiatives. Community-Led Total Sanitation (CLTS) is participatory development within the framework of grassroots postmodern theory. While the collaborative process of CLTS incorporates community involvement, it still imposes globalized sanitation norms and thus a dominant external worldview. This paper will highlight the tension between the participatory and postmodern framing of CLTS and offer policy recommendations for improving the CLTS process.

The field of environmental justice coalesced primarily around issues of inequitable exposure to pollution and other toxic substances. The field has subsequently expanded to include many other issues related to the just distribution of both environmental benefits and hazards, including the concept of energy poverty. While heavily studied in the developing world and in western Europe, energy poverty has not received much attention in the United States. This year the ES Senior Seminar, in partnership with the Minneapolis non-profit Center for Earth, Energy and Democracy (CEED), took on the task of describing and analyzing the risk of energy poverty in the Twin Cities. Students used data on income, home age and a person’s rental or ownership status obtained from the US Census and the American Community Survey to develop and apply a metric for energy poverty vulnerability. The class will present maps of energy poverty risk and discuss the intersections of energy poverty with other demographic variables such as age and race. Additionally the class will present broader research to frame the underlying factors contributing to energy poverty in the Twin Cities.