The History department of Macalester College deplores the murder of Mr. George Floyd by members of the Minneapolis Police Department. We support the protestors who call for justice locally, nationally, and globally. We call on leaders and authorities in the Twin Cities to review the history of recent and extended violence to contextualize this moment and formulate new policies respecting the rights of marginalized peoples.

Macalester College sits on Dakota homelands. Our campus is located five miles fr​​om Fort Snelling, which once housed slaves such as Dred and Harriet Scott. Fort Snelling also served as a concentration camp in the wake of the U.S.-Dakota War, a conflict that led to the largest mass execution in the history of the United States.

From redlining and race riots on Plymouth Avenue to the deliberate destruction of the vibrant Rondo neighborhood and the police brutality that led to the creation of the American Indian Movement in the 1960s, our Twin Cities and Macalester communities have been built on the blood of people of color. As historians, we are acutely aware that racism and settler colonialism are not limited to Minnesota or the United States. But Mr. Floyd’s murder at the hands of Minneapolis police officers has laid bare the systemic underpinnings that continue to uphold these injustices.

Justice for Mr. Floyd cannot be an end in itself. Justice now should be part and parcel of the much needed fundamental change to and resolution of pervasive, blatant, and systemic racism and structural violence. It demands our collective long-term and sustained engagement from our institutions and classroom to households and streets. Inspired in part by our students, who have reminded us of the necessity of direct action, the Macalester College History Department has made two donations in the name of Mr. George Floyd: one to MIGIZI, a Native organization that “nurtures the development of Native American youth in order to unleash their creativity and dreams”; and Rondo Avenue, Incorporated, a community partner that serves the African-American Rondo neighborhood in Saint Paul that has been incredibly generous to Macalester History students.

This is just a first step.  In the words of our chair, Professor Linda Sturtz, “our charge or vocation (‘calling,’ if you will), as Macalester History professors, is to shape the world for the better by educating students as they become deeply engaged citizens.” 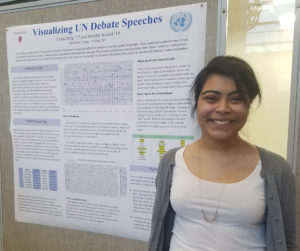 History major Jennifer Arnold presenting work on topic modeling of UN speeches from 1970. This work from her data visualization class with Bret Jackson gives her the framework she needs to pursue her research questions about the impact of historical events on Fidel Castro’s speech rhetoric.

Narcan Training
Students in Professor Amy Sullivan’s “Uses and Abuses: History of Drugs, Addiction and Recovery in the U.S.” received training in use of Narcan for opioid overdoses by Stephanie Devich of Valhalla Place/Meridian Behavioral Health. Twenty-seven kits were handed out to everyone.

“History is All Over” Newsletter
The Fall 2017 edition of the History newsletter is available now here.

Spring 2017, History Professors Nominated for Educator of the Year Award
Each year Macalester students nominate professors for the Educator of the Year Award. The award recognizes staff or faculty members who consistently support students’ co-curricular learning experiences. Through this award, student nominators applaud educators for their leadership ability, many contributions and commitment to campus life. This year, students chose to honor four Historians with nominations. Please join us in congratulating them: Katrina Phillips, Chris Wells, Cameron Bradley, and Jessica Pearson.The East Side Freedom Library Named 2017 winner of the John Sessions Memorial Award

The ESFL, co-founded by history professor Peter Rachleff and theatre professor Beth Cleary, was selected as the 2017 winner of the John Sessions Memorial Award. The award, sponsored by the Department for Professional Employees AFL-CIO, recognizes the library’s significant effort to work with the labor community. Read more

Tsione Wolde-Michael is a Macalester Alumna who was mentored by now-retired historians, Jim Stewart and Peter Rachleff.  For six years, Wolde-Michael worked with a small team curating the Slavery and Freedom exhibition at the Smithsonian’s new National Museum of African American History and Culture in Washington, D.C.  With her background in history, she researched the collected items and wrote much of the narrative on the museum’s plaques.  She is also a PhD candidate in history at Harvard. Read more about her here. 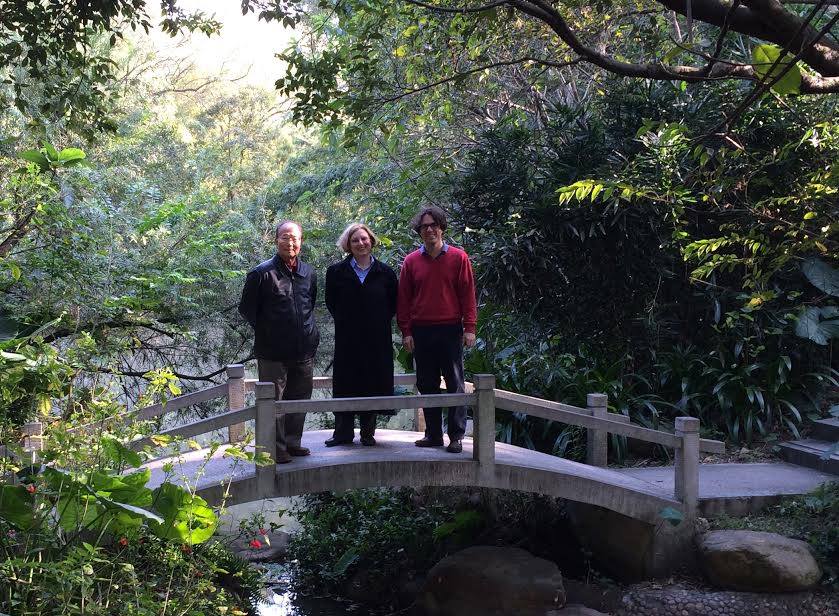 History professors Linda Sturtz, Yue-Him Tam, and Ernie Capello pose on a bridge in Guangzhou, China, where they traveled in mid-December to present at a conference. 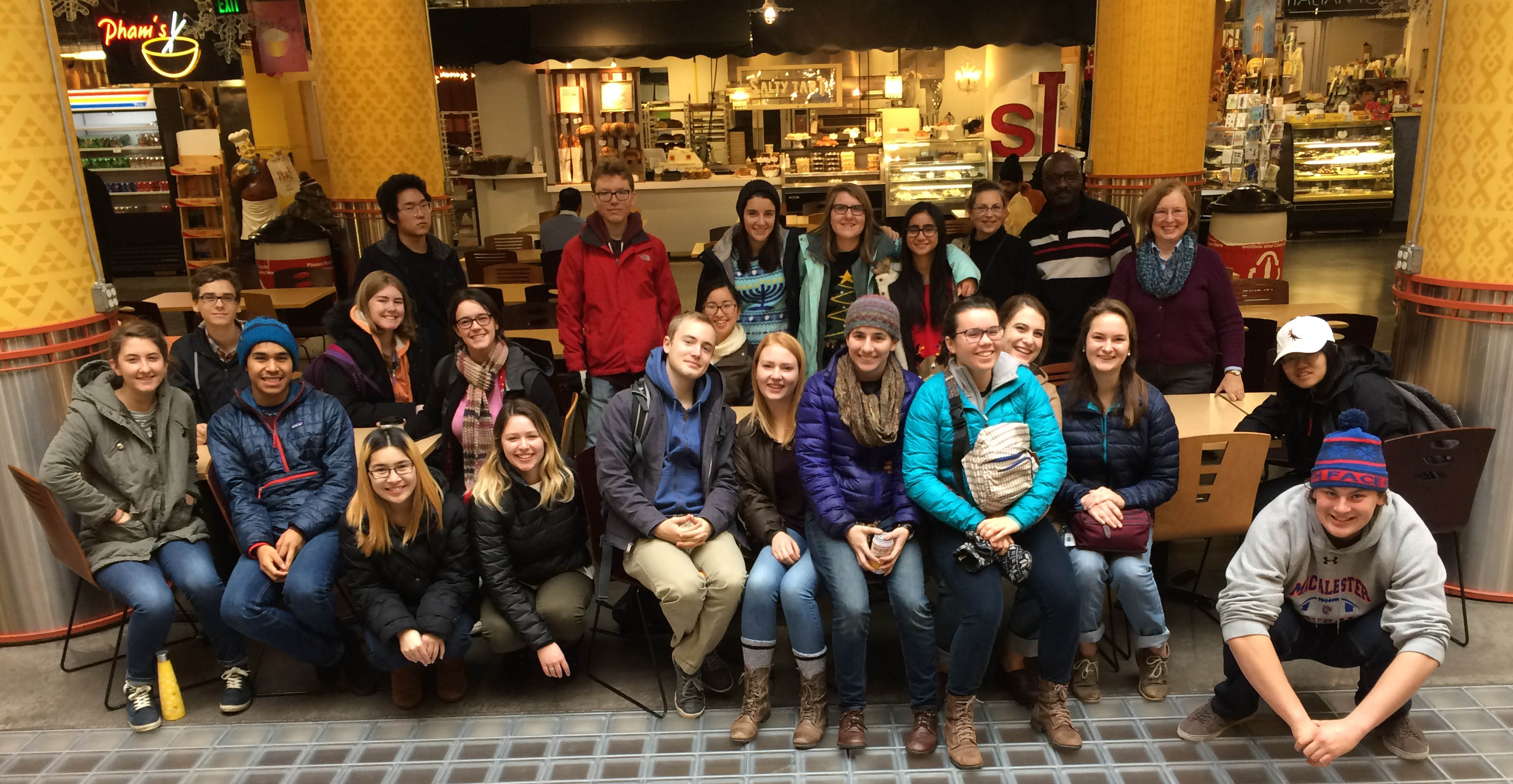 Linda Sturtz’s first year course (FYC) on The Transatlantic Slave Trade  along with Joëlle Vitiello’s FYC on Food in French and Francophone Cultures took a field trip to Midtown Global Market to learn about African Foods from Jojo of Kilimanjaro Catering.

History is All Over – New Newsletter
The fall 2016 issue of “History Is All Over: The Macalester History Department Newsletter,” is available now, here.
The newsletter has many pictures, plus stories about: Who’s New in History?, Find HISTORY OPPORTUNITIES and More on our Web Site, Upcoming HISTORY EVENTS, All about History Club, History Courses for Spring 2017, This Fall in History, After Mac, After Mac for Emeritus Professor Peter Rachleff, Reports on Alumni and Old News (Stories from Spring and Summer 2016).

“Remembering Rondo A History Harvest” Website and Video
Rondo neighborhood community members, and Macalester history students and faculty collaborated on a course this spring that resulted in the creation of an online museum. The Remembering Rondo History Harvest was designed as a way to address the often-limited histories available in museums and archives. Communities harbor their own histories and have stories that often do not get recorded. A model called History Harvest changes the dynamic of the archive by digitizing what the community identifies as culturally, socially, or politically valuable, pulling from items in their own homes and from their family histories. This year a team of students worked directly with the Rondo community, an historically Black neighborhood intentionally bisected by the construction of I-94 in the 1960s. The Remembering Rondo History Harvest process collected oral histories, and helped to develop new relationships between Macalester and our local communities.

“The Study of History” Students Attend Talk by History Alumna

Students from Linda Sturtz’s “The Study of History” class visited the East Side Freedom Library in St. Paul. Kim Nielsen ’88 (center) gave a presentation on her latest research, “Diagnosable: Money, Marriage, and Female Insanity 19th Century America.” Kim was a history major at Macalester and is a professor in the disability studies program at the University of Toledo.

Professor Ernie Capello Receives Burkhardt Fellowship
Full story here.
Professor Capello is a 2016 recipient of an American Council of Learned Societies Frederick Burkhardt Residential Fellowship for Recently Tenured Scholars. The fellowship is in support of research for his project, Equator Imagined: Commemorating Geodesic Science in the Andes, which he will pursue at the  Institute of Latin American Studies at Columbia University in 2017-18. Professor Capello’s study will consider the commemoration of the Franco-Hispanic Geodesic Mission (1736-42), when an international group of scientists led by the Frenchman Charles Marie de La Condamine traveled to the Spanish colony to measure the arc of the equatorial meridian. The mission was commemorated through the elevation (and destruction) of pyramidal markers, Andean landscape paintings, a second French scientific mission redoing the 18th-century measurements, the development of modern tourist sites, and a counter-memorial tradition celebrating indigenous geodesic and astronomical knowledge.

The Frederick Burkhardt Residential Fellowships for Recently Tenured Scholars support scholars in the humanities and social sciences in the crucial years immediately following the granting of tenure, and provide potential leaders in their fields with the resources to pursue long-term, unusually ambitious projects.

Students in the “Public History in Action-Remembering Rondo” class, led by professors Amy Sullivan and Rebecca Wingo, hosted a digital and oral history gathering “History Harvest” event on March 5. Listen to the story that aired on Minnesota Public Radio’s All Things Considered here.

E-ssignment Applies Modern Tool to the Exploration of History
Read this article about a “StoryMap” assignment for students in the fall 2015 “Transatlantic Slave Trade” history class.

Opportunity Updates on the History Website
An “Opportunity Updates” section is now available on our website. It’s a place to look for nice-to-know things that our department is often asked to share with our students: calls for papers, internship opening notices, recruiting, grad and study away program notices, and more. Find It Here.

Bassam M. Khawaja ’11, has been named a Sandler Fellow at Human Rights Watch. He will work in the Children’s Rights division there documenting the denial of education to children seeking refuge from the civil war in Syria.

Professor Linda Sturtz joined the history faculty this fall. She will serve as department chair.

Professor Sturtz’s work examines the history of early North America and the British Caribbean within an Atlantic world context.  She has taught courses on the early modern Atlantic world, music as history and public history. Prior to coming to Macalester, she taught at Beloit College and in the Associated Colleges of the Midwest Newberry Library Program. She once worked as a Park Ranger at Colonial National Historical Park. Her first book, Within Her Power: Propertied Women in Colonial Virginia (Routledge, 2002) took a longue-durée approach to understanding the ways that law and transatlantic trade shaped the opportunities of women. Her current research focuses on the ways that African-Caribbean women sought to cultivate an expressive culture within a slave society and into how their tactics adapted to new forms of social control in the aftermath of abolition.

We are very pleased to welcome her.

Professor Jerry Fisher has passed away. This notice was published in the Minneapolis Star Tribune on May 18, 2014:
Fisher, Jerry K. Beloved Macalester College professor and internationally recognized cross-cultural educator, passed away peacefully on May 8. Survived by his wife, Aiko; son, Andy; daughter, Cindy Wilson (Bert); 3 granddaughters, Kylie, Sarah and Naomi, and sister, Peggy. Born in Ashland, WI in 1937, and preceded in death by parents, Robert Warren Fisher and Lois (Carroll) Fisher of Beloit, WI, and brothers, Robert and Donald. Memorial service to be held at Macalester College’s Weyerhaeuser Chapel, 1600 Grand Ave., St. Paul, on Sunday, June 22 at 2:00 PM.
A notice also appeared in the May MacWire and the Macalester Daily Piper.

Cat Jacquet, History will present “Teaching Transgender History: Challenges and Surprises.”  Jacquet will discuss her experiences teaching courses on transgender history for two semesters at the University of Illinois at Chicago, and now for the third time at Macalester. Teaching these courses has been a labor of love, yet it has also presented her with challenges unique to teaching about sexual and gendered minorities. Jacquet will reflect on the challenges and surprises that have presented themselves along the way she’s had to rethink her own basic assumptions and naïve expectations. 12:00 PM  – 1:00 PM, Friday Apr 4, 2014, Jan Serie Center for Scholarship and Teaching (Room 338), DeWitt Wallace Library. All faculty are welcome.  Lunch will be provided.

Alumna Jemma Brown ’11 has been hired as Associate Producer of Video & Social Media at The Moth.

Professor Chris Wells gave the annual public lecture for the history department at St. Thomas University. His lecture was, “Nightmare or Love Affair?: The History of Car Dependence in the United States” on Tuesday, March 4 at 7 pm in the O’Shaughnessy Educational Center Auditorium. Event Poster PDF

History grad Olivia Belote ’11 provided a little focus for a Minneapolis Star Tribune weather photo on February 21. See the story in pictures that developed on that snowy day.

“The Weather is Fine” story that appears on Macalester’s March home page features history major Ross Bronfenbrenner ’14. The story links to his blog about our (not so rotten) weather.