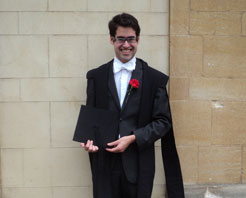 A Long Way From Macalester

While at Macalester, he learned Greek, Latin, and Hebrew; studied abroad at the ICCS in Rome; and wrote his honors thesis about feminine prophecy and identity in ancient Greek and Jewish traditions.

While at Oxford, Daniel studied at the Oriental Institute with famous scholars Martin Goodman, Tessa Rajak, and his supervisor Alison Salvesen. He once went looking for a bathroom with famous archaeologist and expert on Qumran, Dr. Jodi Magness, during the intermission of her lecture. Daniel has also had some hair-raising run ins with Sir Fergus Millar, and Sir Fergus once kicked him out of the Oriental Institute library for discussing a seminar paper too loudly. Aside from rubbing shoulders with academic luminaries at Oxford, Daniel enjoyed the lifestyle of an academic ex-patriot in the United Kingdom and created a close and caring community abroad.

Daniel headed next to Providence, Rhode Island, where he is working on a PhD in Religious Studies at Brown University with heavyweights Michael Satlow, Ross Kraemer, and Susan Ashbrook Harvey. In the 2014-15 academic year, he paused to teach at the Intercollegiate Center for Classical Studies in Rome with Macalester Professor Beth Severy-Hoven.

Daniel’s research is on Judaism and Christianity in Late Antiquity, shifting away from his roots in the Classical Period and focusing on the relationship between the two traditions in the eastern part of the Mediterranean and their relationship back to Hellenism. Ultimately, he would like to teach as a professor at a university or college. If you have a tip on a job posting in Religious Studies (with a focus on Late Antiquity, Judaism, and Christianity) in the next year or two, please contact him!