Kevin Wilhelm will be speaking about his work with REI, The North Face, and Puget Sound Energy. How did he convince them to reduce their carbon imprint? What actions did they take? How might Macalester students find jobs in the area of “Green Consulting”?

The proliferation of university programs in the environmental field has created a bewildering number of choices for an aspiring graduate student. How will you identify the degree and experiences you need to shape a rewarding career? As professor of environmental science at Bard College and recent acting director of the Bard Center for Environmental Policy, Dr. Mara Ranville ’95 (double major environmental studies and geology) has advised many students going through this confusing and challenging process. She will discuss her own highly unorthodox career trajectory, and offer practical advice for making sense of graduate school options and surviving the transitions that characterize life after Macalester. 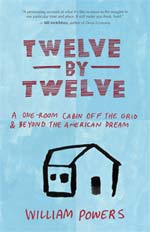 William Powers will speak about his book Twelve by Twelve. Publishers Weekly review: “Powers’ sobering and often hilarious narrative of his life in the Twelve by Twelve offers precious insights into the ways that all individuals living in a fast-paced consumer culture might incorporate different ways of thinking about the natural world into their lives.”

William Powers is an accomplished writer of three books and a contributor to the Atlantic Monthly, the Washington Post, the New York Times and Slate, where he has used the power of writing to crystallize the debate around issues of internatinal development and environmental sustainability.

Whitney Clark is the Executive Director of Friend of the Mississippi River (FMR) a not-for-profit organization dedicated to protecting and enhancing the Mississippi River and its watershed in the Twin Cities area. For the past 25 years Whitney has worked to improve Minnesota’s environment as a staff member for several local environmental organizations including Citizens for a Better Environment and Clean Water Action. During his 13-year tenure as Executive Director, Whitney has led FMR’s growth from a start-up group with one staff to a leading conservation organization with a staff of seventeen. He has extensive experience in environmental policy, lobbying, advocacy and education campaigns, partnership building around environmental issues and grassroots fundraising. A Minneapolis native, Whitney is an alumnus of the University of Minnesota where he studied ancient history.

“Globalization, US-SA and the Environment: The Good, the Bad and the Ugly?”
Speaker: Peter Johnston, Dept. of Environmental & Geographical Science, University of Cape Town

South Africa is a country of contrasts, with first world city infrastructure and a leading world player in invention, mining, academics, sport and arts; a third world country in terms of poverty levels, rural infrastructure and service delivery, and (often) political leadership. A look at aspects of South African life and historical development, with reference to global trends, influence and inequalities.

Peter Johnston received his Ph.D. in applied climatology at UCT in 2000. His Ph.D. research topic was the distribution, uptake and general usefulness of information emanating from seasonal forecasts for the various user sectors within the South African milieu. He is currently working with maize and wheat farmers in order to better understand the decision-making processes vis-à-vis climate forecasts. He is also working on a WRC funded project assessing the availability and usefulness of weather and climate information for water resource managers.

It’s a catch-22: as demand for water in Delhi, India, increases with a growing population, large-scale dams are built to bring water from the Himalayas to the capital. In turn, these dams displace rural dwellers to the city, who then increase demand. This is just one of the seeming paradoxes of the water crisis in Delhi. Is this cycle inescapable? What happens when a common resource dries up?

Join documentary filmmaker Katie Gillett, of “The Groundwater Up Project”, in a discussion about one of the most important issues in contemporary India. This presentation will untangle Delhi’s water crisis, including inequity in urban supply and distribution, the building of large-scale dams in the name of development, and the alternatives that Delhiites are pursuing today in response.

Sponsored by the Environmental Studies Department and Urban Studies Program.

“Dispersal in Common Reed (Phragmites australis) on the Platte River: The Key to Designing Better Management Approaches?”
Speaker: Travis Henspeter ’02, Ph.D. student in the Ecology, Evolution, and Behavior Program at the University of Minnesota

Common Reed has been a minor component of North American wetlands for tens of thousands of years. In the last decade it has become a major pest species on the Platte River, Nebraska, raising concerns that it is destroying critical habitat for migratory birds, and extracting a significant proportion of already-stressed water resources. Travis’ research attempts to better understand its dispersal processes so that management techniques can be more effective and efficient.

Travis did his undergraduate work in history at Macalester College, and have since entered the Ecology, Evolution, and Behavior program at the University of Minnesota, seeking a doctoral degree. He is broadly interested in restoration ecology and invasion biology, and hopes that his work can contribute to more effective and cost-efficient restoration solutions as the need for human management of ecosystems becomes more obvious.

“In a Tidal Wave of Fear and Ignorance, Nov. 2nd … Is There Still Room for Hope and Change?”
Speaker: Annie Young, Environmental Justice Organizer

Annie Young has devoted the last 40 years to community organizing with a focus on environmental issues. Annie is a leading voice in what has become known as the “sustainability movement,” an international effort to reverse damaging trends in the environment, economy, and social systems. She shares a deep passion and commitment to social change and the justice for all movements

Ms. Young draws her experiences from work in the non-profit community and her political activism. She founded The Green Institute along with others who had “cut their teeth” on stopping the building of a Garbage Transfer Station in the Phillips Neighborhood. She currently works as the Environmental Justice organizer in the Harrison neighborhood and in 2009 was re-elected (for a sixth term) to the Minneapolis Park and Recreation Board as a city wide Commissioner. For the last 21 years she has served on the Park Board where she has called for the reduction of the use of pesticides in the Park system along with youth programming, water quality and long-term sustainability.

In 2010, she ran for statewide office as the endorsed Green Party candidate for State Auditor. Winona LaDuke served as co-chair of her campaign. Young, like LaDuke, believes that to create a socially-just society it is important to understand the impact of institutionalized racism and honor the 500 years of struggle by people of color over land. Current land-use issues, suburban sprawl, gentrification/displacement of low-income communities and revitalizing inner cities, all have deep race and class implications and affect our ability to build socially-just, sustainable communities. Young is an eloquent and unifying voice for solutions to problems facing future generations.