Aotearoa, New Zealand, lies at the bottom of the Pacific Ocean.  Its nearest neighbour (Australia) is ~2000km to the west. The New Zealand biota evolved in isolation and, importantly, in the absence of terrestrial mammals.  Aotearoa was the last significant landmass on earth to be settled by people. Polynesians arrived approximately 800 years ago and Europeans only arrived in significant numbers from the late 1700’s onward. land and its biota:

Our biggest current environmental challenges are arguably management of fresh water and management of introduced species. The New Zealand economy is driven by primary industries: agriculture (specifically dairy), horticulture, production forestry, aquaculture and fisheries, and by tourism. Both our economy and conservation rely on eradication (or at least control to low levels) of pests and weeds that are already here, as well as on tight biosecurity (prevention of new alien organisms entering the country).

Management of our natural resources is characterised by the drive for “halting the decline in biodiversity” and achieving sustainability. There are many restoration projects underway in New Zealand. This presentation will use a couple of case studies to look at the role of restoration and the importance of ecological monitoring.

On June 5 and 6, Sustainability Manager Suzanne Savanick Hansen and student Maria Langholz traveled to Brazil to attend the World Symposium on Sustainable Development at Universities, an official parallel conference to the larger Rio+20 United Nations Conference on Sustainable Development.  In addition, they traveled to Curitiba, Brazil, to see this city described as one of the most sustainable cities in the world. Hear about their experiences in Brazil and how the Sustainability Office is planning to continue connecting internationalism and campus sustainability.

Maria Langholz ‘14 is an Environmental Studies and Applied Mathematics double major who has been working in the Sustainability Office.  She is one of the coordinators of Macalester Sustainability Student Worker Network.  She has a particular interest in cities and sustainability. 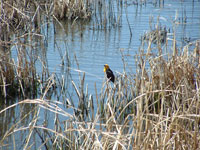 Shallow lakes play a disproportionate role in carbon cycling based on their size. They also tend to exist in two alternative states: one dominated by aquatic plants and the other dominated by aquatic algae. Leah will discuss how carbon cycling and permanent carbon burial in shallow lakes differs between these states, and suggest ways in which these highly dynamic systems can potentially be managed to increase carbon storage.

Climate change is an issue that does not seem to get the attention it deserves in political races, despite the strong scientific consensus on the issue. In particular, Republican politicians do not seem to want to touch the issue with many conservatives seeing it as a debatable issue scientifically, or worse, as a hoax. This unfortunate situation led John Howard to run for U.S. Congress on a pro-climate solutions platform. John remained a Republican candidate, despite having opposite views on climate change, in order to encourage dialogue within the party and show that Republicans can believe in climate change. Through the process of campaigning and going door to door, John gained a unique perspective on how conservatives view this issue. Additionally John will provide insights into running for office and the role ordinary citizens can play in improving the dialogue on climate change.

John Howard ran for the U.S. House of Representatives in Minnesota’s 3rd Congressional District as a centrist Republican in this year’s August primary election. He gained just under 10% of the vote, which was won by the incumbent, Erik Paulsen. John ran due to Congressional inaction on climate change, which he sees as a defining issue of our time. John is a graduate of St. Olaf College (class of 2010) where he was a biology major, and is a NASA Earth Ambassador. He currently works for an engineering firm, EVS, as an environmental consultant. He volunteers with local environmental groups including Cool Planet, Citizens Climate Lobby and the City of Edina Energy and Environment Commission.

To combat climate change and hunger, a number of governments, foundations, and aid agencies have called for a “New Green Revolution.” Such calls obfuscate the dynamics of the Green Revolution. Using Arrighi’s analysis of capital accumulation cycles, it is possible to trace a Long Green Revolution that spans the twentieth and twenty-first centuries. Such an analysis illuminates commonalities in past and present Green Revolutions, including their bases in class struggles, modes of governance—particularly in the links between governments and philanthropic institutions—and the institutions through which truths about agricultural change were produced and became known. Such an analysis also suggests processes of continuity between the original Green Revolution and features of twenty-first century agricultural change, while providing a historical grounding in international financial capital’s structural changes to help explain some of the novel features that accompany the New Green Revolution, such as “land grabs,” patents on life, and nutritionism.

Rajeev Charles Patel is simultaneously a writer/producer/co-director for a documentary and book about the future of food; a Fellow at the Institute for Agriculture and Trade Policy (IATP); Visiting Scholar at the Center for African Studies, University of California, Berkeley; Honorary Research Fellow at the School of Development Studies, University of KwaZulu in South Africa; and a Fellow at the Institute for Food and Development Policy/Food First. He received a Ph.D.in the Department of Development Sociology at Cornell University; an MSC (Econ) at the London School of Economics, University of London; and a B.A. (Honors) at Balliol College, University of Oxford. His recent books include The Value of Nothing (2009); Food Rebellions! Forging Food Sovereignty to Solve the Global Food Crisis (with Holt-Gimenez and Shattuck, 2009); Stuffed and Starved: Markets, Power and the Battle for the World Food System (2008); and Promised Land: Competing Visions of Agrarian Reform (with Rosset and Courville, 2006). A number of his lectures can be accessed online. Among other honors, he was selected by the Utne Readeras one of“50 Visionaries Changing Your World” (2010).

Plant targeted genetic modification (TagMo) encompasses a set of new genetic engineering techniques that have the potential to revolutionize plant genetic modification by increasing the speed and ease of genetic modification, facilitating the introduction of novel traits in previously unmodified plant species, and falling outside existing regulatory authority.  Plant TagMo represents an emerging technology in the early stages of development.  As such, exploring the possible and desired impacts of plant TagMo and its governance requires studying its potential futures.  Drawing upon insights from the fields of anticipatory governance and future studies, Adam explored the potential futures of plant TagMo through expert stakeholder interviews.  In his research he asked: How do expert stakeholders, those who first create, delimit, and inform the societal discussion concerning TagMo, provide meaning to plant TagMo and its future?  How do these “futures” of plant TagMo conflict?

Adam Kokotovich conducted and analyzed 31 in-depth interviews and reached the following conclusions.  First, TagMo futures are constituted by conflicting discourses.  Second, TagMo futures reveal divergent ways of understanding and governing plant TagMo.  Key differences involve how plant TagMo will impact the environment and plant science, and how governance systems should change in response to plant TagMo.  He explores the implications of these results for plant TagMo governance and argue that anticipatory governance will be better suited to address contemporary technology-related issues by explicitly acknowledging and critically engaging conflicting futures.

Adam’s interests lie at the intersection of science & technology studies, risk assessment, and science, technology & environmental policy.  In his dissertation, he studies how risk and risk assessment are contested in plant genetic engineering governance.

When thinking about the history of environmentalism, we rarely think of labor unions.  But by looking at how unions expressed the environmental agenda of their members, we can open our eyes to new understandings about the relationship between humans and nature.  The International Woodworkers of America, a timber workers union based primarily in the Pacific Northwest between 1937 and 1994, provided a strong challenge to the timber industry’s forestry and environmental practices during its existence.  Ranging from its support for creating national parks and wilderness areas to its attacks upon clearcutting and other destructive forest practices in the 1940s to empowering its members through EPA and OSHA regulations in the 1970s and 1980s, the IWA stood as a powerful working-class voice for both labor rights and sustainable environmental management of the Northwest’s natural resources.

Erick Loomis is an Assistant Professor at the Unviersity of Rhode Island,  He received is Ph.D. at the University of New Mexico.  His research interests are in environmental history, labor history, late 19th-early 20th century U.S. History, and the U.S. West.

The ways in which Antarctic scientists organize and describe these climate change examples translates scientific observations conducted in Antarctica and analyzed in the field or a laboratory into a collection of data for the public on climate change. As the examples are described and the images are projected onto a screen, the data and its interpretations make meaning for the audience. Certain data—specifically the collapse of the Larsen B Ice Shelf—are so compelling that its meanings translate and amplify, both as scientific proof of climate change in Antarctica but also as caution of climate change repercussions on short, visible timescales. Jessica suggests that the Larsen B data in particular have an epistemic and political agency, working to translate scientific facts into political meaning—but one of caution and urgency, a kind of concreteness to the futuristic science of climate change.

Jessica O’Reilly is an environmental anthropologist interested in climate change and environmental management in Antarctica.  She recieved her PhD from the University of California Santa Cruz and is currently an assistant professor at Saint John’s University/ College of Saint Benedict.

Dr. Wilson’s research examines policies and institutions supporting development of carbon-managed energy systems. She holds a doctorate in Engineering and Public Policy from Carnegie Mellon University and was selected as a Leopold Leadership Fellow in 2011.