Michael Krause has a B.A. from Macalester with an English major and a law degree from the University of Minnesota. He has been director of the Green Institute in the Philips Neighborhood of Minneapolis since 1996. The Green Institute is an entrepreneurial environmental organization creating jobs, demonstrating innovative building and energy approaches, and improving the quality of life and of the urban environment in inner city Minneapolis. It encompasses several projects including the Reuse Center and the Eco-Enterprise Center. The Institute received the National Award for Environmental Sustainability from the President’s Council on Sustainable Development in 1999.

Project, campaign, and issue updates will be welcome from student groups, the Campus Environmental Issues Committee, and the Environmental Studies Program. If you want to find out more about environmentalism at Mac or want to share information about projects or campaigns you are working on, come to this open forum.

Loring Harkness will discuss PETA campaigns addressing such issues as industrial agriculture, confined animal feedlot operations, and the values of eating lower on the food chain.

Professor Purvis-Roberts has a Ph.D. in Physical Chemistry from Princeton. Much of her research has focused on the environmental and health impacts of various kinds of chemical pollution. Her international field experience includes a National Research Council Young Investigator Program in Kazakhstan in 2001 and 2002, a documentary film project on “Solar Power for Rural Africa” in March of 2000, and public policy research on air pollution in Nairobi, Kenya through the Woodrow Wilson School of International Affairs at Princeton. She has also done postdoctoral research at the national Center for Atmospheric Research in Boulder, CO.

Her talk at Macalester will present research results on the environmental and health risks arising from the nuclear testing by the Soviet Union near the city of Semipalantinsk, Kazakhstan. Many of the villages surrounding the test site are now contaminated with radioactive material. The research project is studying the environmental and medical data in the affected villages and the differing perceptions of risk among residents, the doctors who treat them, and the scientists who work at the test site.

Mittal, a native of India , is an internationally renowned activist and thinker around food and agriculture, human rights, trade issues, and rural development issues. She is the editor of America Needs Human Rights (Food First Books, 1999), and The Future in the Balance (Food First Books 2001) and has authored articles for numerous books. Her articles and opinion pieces on trade, food sovereignty, biotechnology, and the right to food have appeared in such publications as The New York Times, The Los Angeles Times, The Nation, The Washington Post, and The Times of India . She is a jury member of the Right Livelihood Award (also known as the Alternative Nobel Prize) and serves on board of various civil society organizations.

Trained as a political scientist in India and England , Ms. Mittal has been a visiting scholar at UC Berkeley and has taught at the New College of San Francisco and the Dominican College of San Rafael . Prior to coming to the U.S. , she worked with the Society for Participatory Research in Asia , a major development group in India .

The Institute for Food and Development Policy, better known as “Food First” is a member-supported, nonprofit “peoples” think tank and education-for-action center. It was founded in 1975 by Frances Moore Lappe and Joseph Collins, following the success of their book, Diet for a Small Planet. The work of Food First highlights root causes and value-based solutions to hunger and poverty around the world, with a commitment to establishing food as a fundamental human right. More information is available as www.foodfirst.org.

“The World Bank and Sustainable Development: A View from the Inside”
Speaker: Karin Shepardson ’86, Senior Regional Coordinator for World Bank programs in the Latin American and Caribbean Region

Lori Hartzell has been in the Hospitality industry for over 15 years. She is a graduate of St. Cloud State University with a degree in Business Management. As General Manager at Macalester, she is committed to working with student organizations to form positive relationships between students and Café Mac to carry out Bon Appétit’s commitment that “We will always conduct our business with the highest ethical standards. This includes the impact we make on the community and our environment.”

EnviroThursday is sponsored by the Environmental Studies Program. Refreshments are provided. Mug It – Bring your own mug and fill it up. 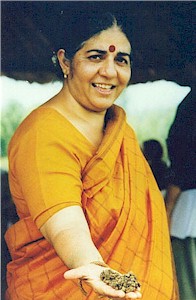 Dr. Shiva is internationally recognized for her contributions to the fields of women and the environment, biodiversity, biotechnology and intellectual property rights, and ecological issues related to agriculture. She is the author of more than a dozen books and over 300 papers in leading scientific and technical journals. Among her best known books are Staying Alive: Women, Ecology and Survival in India; Biopiracy: The Plunder of Nature and Knowledge; Stolen Harvest: The Hijacking of the Global Food Supply;and her most recent book, Water Wars: Privatization, Pollution, and Profit.

Dr. Shiva combines sharp intellectual enquiry and effective activism. She is trained as a physicist with a Ph.D. in Physics from the University of Western Ontario. She has been a visiting professor and lectured at universities around the world, including Mt. Holyoke in the U.S. and York University in Canada . In 1982 she founded an independent institute, the Research Foundation for Science, Technology and Ecology in India, dedicated to high quality and independent research addressing ecological and social issues. She continues to serve as the Director of that Foundation.

Dr. Shiva has served as advisor to governments and many non-governmental organizations and has been an instrumental force in starting many grass roots movements for sustainability. Time Magazine identified Dr. Shiva as an environmental “hero” in 1993 and Asia Week has called her one of the five most powerful communicators of Asia.

In Mexico, 80% of remaining forests are owned by villages, as common properties. Many villages have established logging cooperatives of various kinds to sell logs and lumber. Many of these communities seek certification to demonstrate the quality of their forest management. Forest certification is a “green label” scheme, similar to organic certification, in which independent organizations conduct rigorous forest audits. If production standards meet their environmental and social criteria, they grant producers the right to label their logs and lumber as “coming from a well-managed forest.” Certification is supposed to be a mechanism for sustainable development because it links environmentally-savvy producers with environmentally-conscious consumers. Drawing on extensive interviews with Mexicans involved in forest certification during the summer of 2003, the presentation addresses the benefits from forest certification, the limits of this market-based mechanism for sustainable development, and the social justice issues that arise.

“Saving Species in Working Landscapes: Combining Biology and Economics”
Speaker: Erik Nelson, a Ph.D. Candidate in the Department of Applied Economics at the University of Minnesota

Habitat loss and fragmentation are major threats to biodiversity. Establishing formal protected areas is one means of conserving habitat, but socio-economic and political constraints limit the amount of land in such status. Addressing conservation issues on the vast majority of lands outside of such preserves is also necessary. In this presentation, Erik Nelson will discuss a model which incorporates both biological and economic information to select land uses that achieve both species conservation and economic returns. The discussion will focus on three alternative land uses, agriculture, forestry, and biological reserve (protected area), for a landscape with characteristics based on the Willamette Basin in Oregon.

In addition to being a Ph.D. candidate in Applied Economics at the University of Minnesota, Erik also has a minor in conservation biology and received an MA in environmental policy from the Hubert H. Humphrey Institute of Public Affairs at the University of Minnesota in 1997. From 1997 to 2000, Erik worked for ICF Consulting in Washington, D.C., on the creation and promulgation of various U.S. Environmental Protection Agency rules and regulations.

Come hear about the link between environmental and labor issues, and in particular the commonly neglected realities of migrant agricultural workers in Minnesota. Centro Campesino Farmworker Center is a rural development organization dedicated to improving the quality of life and self-sufficiency of migrant and seasonal farmworkers, their children and other low-income families of all ethnic and racial backgrounds. The organization focuses on initiatives to build communities, ensure education opportunities, and secure affordable housing for migrant communities.

A joint presentation by two speakers will give a background of living and working conditions, share a few examples and stories of workers and community coming together for change, and will discuss the values and principles of consciousness raising, both within communities and between communities and institutions (e.g., educational institutions). Those in the audience will have opportunities to get involved in the struggles of the workers.