Dr. Anna Henderson will talk about Minnesota’s water quality issues and her work for the Governor in the Year of Water Action.  She will discuss how science is used and abused in the state and federal legislative process.  She will also talk about her career path.

Dr. Henderson has a PhD in geology and has worked in basic research before going into policy.

Progressing beyond good intentions, Minnesota cities are getting on track to meet their sustainability goals by leveraging an initiative that tracks annual city-wide performance metrics. United through the Regional Indicators Initiative (RII), twenty-seven Minnesota cities are tracking their annual energy, water, travel, and waste performance, and using these indicators to calculate their greenhouse gas emissions. With seven years of data publicly available, these cities are leveraging lessons they’ve learned from their past – and from their neighbors – to create strategic plans for the future. This ongoing initiative provides the missing link in the State’s sustainability framework, positioning individual cities within the context of the State’s greenhouse gas reduction goals and quantifying the effects of implementing best practices such as those defined in Minnesota’s GreenStep Cities program.

Becky Alexander is an architect and researcher at LHB, where she provides a combination of architectural design and performance services. Becky plays a key role in several significant state-wide initiatives to reduce energy consumption and greenhouse gas emissions in Minnesota, including the Regional Indicators Initiative, Minnesota’s 2025 Energy Action Plan, and Minnesota’s B3 and SB 2030 programs. Becky’s design and research is supported by a Bachelor of Arts from Carleton College and a Master of Architecture and Master of Science in Architecture – Sustainable Design from the University of Minnesota.

Despite what you read in the news about nation states rising to the challenge of climate change, it was unlikely under the Obama administration that the Paris accord would keep warming within acceptable limits, and it is even less likely under the Trump administration.  So who or what will rise to the challenge?  This talk is about some of the latest developments in addressing the climate crisis, and why there is still a reason for hope, and action.

Tim Nixon has ongoing engagement with leaders across a wide spectrum of NGO and private-sector partners.  He has spoken at global policy-making events, including the World Bank Land and Poverty Conference, UN PRI Annual Meeting, and the first global meeting of United Nations Environment Assembly (UNEA).

Our economy is transforming planet Earth into planet Farm. Forty percent of the planet’s ice-free land surface is dedicated to agriculture. Livestock, representing over 70% of vertebrate biomass, use a third of our available freshwater and a third of our cropland for feed. Industrial animal production is a major source of greenhouse gases. Agribusiness’s impact extends to the deadliest of diseases. If by its global expansion alone, commodity agriculture increasingly acts as a gateway through which a wide array of deadly xenospecific pathogens are migrating from the deepest forests and most backwater of farms to the most cosmopolitan of cities. Ebola and Zika both recently re-emerged when logging, mining, and intensive agriculture opened up neotropical forests to their escape. There are other pathogens
evolving more directly off megafarms. Nipah virus, Q fever, yellow fever, SARS, MERS, hepatitis E, Salmonella, foot-and-mouth disease, antibiotic-resistant bacteria, and a veritable grocery list of novel influenza variants have now emerged.

As a matter of standard industrial practice, such diseconomies of scale are externalized off agribusiness margins to governments, the indigenous, workers, consumers, taxpayers, livestock, and wildlife. That is, pathogen fitness is directly tied into the political economy of food production. We can model such connections, some efforts around which we will touch on here. But there are broader implications in play as well. The search for a more perspicacious evolutionary biology is not necessarily divided from the fight for a better world. Hume’s guillotine and Moore’s naturalist fallacy, wise cautionaries at the heart of much of the natural sciences, are often circumstantially fallacious. Whereas many a new scientist is taught in the lab–as opposed to the classroom–that conducting good research revolves around avoiding professionally awkward study questions, in actuality the struggles for truth and justice can be deeply entwined.

Rob Wallace’s research has addressed the evolution and spread of influenza as it relates to the economics of agriculture, Ebola in West Africa and the Philippines, the social geography of HIV/AIDS in New York City, the emergence of Kaposi’s sarcoma herpesvirus out of Ugandan prehistory, and the evolution of infection life history in response to antivirals. Wallace is author of Big Farms Make Big Flu: Dispatches on Infectious Disease, Agribusiness, and the Nature of Science (Monthly Review Press) and co-author of Neoliberal Ebola: Modeling Disease Emergence from Finance to Forest and Farm (Springer). He has consulted for the Food and Agriculture Organization of the United Nations and the Centers for Disease Control and Prevention.

Co-Sponsored by the Geography and Environmental Studies Departments. 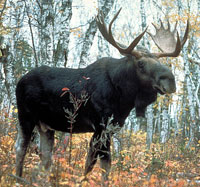 The Minnesota moose population (Alces alces), like many along the southern extent of the North American moose range, has been experiencing a precipitous decline in recent years. Moose are one of the primary subsistence species for the Grand Portage Band of Lake Superior Chippewa and the tribe is deeply concerned over their decline in recent years. The Grand Portage tribal government has invested heavily in moose research and restoration and strives to see the eventual restoration of a sustainable population in Minnesota. Ongoing population surveys of moose on Grand Portage Indian Reservation (GPIR), MN reveal high levels of adult mortality and low annual calf recruitment which is likely related to effects of a warming climate. The Grand Portage Band began a moose collaring program in 2009 and has developed it into a successful program evaluating habitat use, cause-specific mortality, and maternal and calf health relationships. To better understand causes of mortality in the population of moose on GPIR, their team has collared 141 moose since 2010, including 105 adults and 36 calves. This talk will cover the findings of this collaring program, as well as suggestions for management strategies to support a declining moose population.

Seth Moore, PhD., has worked for the Grand Portage Band of Lake Superior Chippewa since 2005 and he presently manages the Grand Portage Department of Biology and Environment.  Dr. Moore has worked on Lake Superior fisheries and regional environmental issues for over 23 years. He earned his PhD in Water Resources Science from the University of Minnesota (2008), a master’s degree in Environmental Biology also from University of Minnesota (1998), and a bachelor’s dual degree in Biology and Environmental Studies from Northland College in Ashland, WI (1994).  Dr. Moore focuses his research efforts on subsistence species of the Grand Portage Band of Chippewa. His current projects include coaster brook trout restoration and identifying habitats used by moose under a warming climate.

As climate change progresses and the frequency of extreme weather events increases, will people be able to adapt to reduce the associated damage? This research develops a two-part strategy  to quantify the existing level of extreme weather adaptation  and its contribution to the reduction in damage across U.S. counties. First, we estimate the relationship between the frequency of extreme weather events and damage. Second, we use our empirical estimates to calibrate a simple dynamic model that relates frequency and damage to adaptation. From this calibrated model, we quantify the level of adaptation and its effects on damage.  We find that even in the most event-prone areas, adaptation investments are relatively small and reduce the damage from extreme weather by less than ten percent.

Stephie Fried (Ph.D. University of California, San Diego) studies the macroeconomics and its applications to climate policy and economic development. She teaches courses on Climate Change Economics, Economic Growth and Development, and Principles of Macroeconomics.

The city of Copenhagen, and Denmark as a whole, stand out in the world’s imagination as a beacon of sustainability. Noted for its bike friendly design, commitment to green energy, and vibrancy of public arts, urban planners world-over look to Copenhagen as a model of sustainable development.

In 2016, a large group of Macalester faculty traveled to Copenhagen to see sustainability in practice and bring these stories back to campus. For this EnviroThursday session, we are joined by Saint Paul leaders in government, public arts and business, who also recently traveled to Copenhagen. They will share insights about how we might Copenhagenize Saint Paul (and the rest of Minnesota).

“Political Leadership and the Climate: Is Climate Change Women’s Work?” by Isabella Soparkar ’17

In an era when climate science is politically controversial, recent polling data shows that American women are more concerned about climate change than their male counterparts. This research uses both voting record analysis and qualitative interviews with legislators to examine whether the observed gender gap on climate change persists among elected political leaders. Linear regression results show no statistically significant climate change gender gap within legislative voting behavior, and interviews suggest that though women may be more willing to collaborate on climate change policy than men, subtle gender differences are often overridden by partisanship. However, even small factors influencing political leaders’ opinions on climate change matter in a world that must move towards climate solutions.

“Strategies for Increasing Deployment of Photovoltaics in Developing Countries: Lowering Implementation Barriers and Reducing the Cost of Technology” by Yifei Sun ’17

Photovoltaic (PV) technology has gained increasing attention as an alternative to fossil fuels for energy production due to the problems associated with climate change and concerns about instability in fossil fuel market. While the emphasis of PV development has primarily focused on developed countries, PV also has great potential in developing countries, especially in the rural and remote communities. Through the discussion of current PV technologies and market, we find a potential of developing low cost PV as a solution for developing countries’ need for energy and climate mitigation. This talk will explore implementational and technological strategies of increasing solar PV deployment in developing countries.

“The Carbon Continuum: Assessing the Potential for Production Agriculture in Minnesota to Mitigate Climate Change” by Henry Whitehead ’17

Production agriculture is responsible for the third largest output of greenhouse gases in Minnesota. Like energy and transportation, it is imperative that agriculture reduce its GHG emissions to lessen the impacts of climate change, despite the rigidity of existing infrastructure and the forcings of inertia. This thesis examines changes to farm management practices that farmers who produce beef, corn, and soybeans can adopt which not only reduce the farm’s GHG emissions, but also provide a host of other benefits to farmer and land alike. In the best scenarios, a farm can go from carbon-positive to carbon-negative. By looking at innovate case-study farms from around Minnesota, we can see what a future agricultural system that is both more sustainable and climate-smart might look like.

The Engel-Morgan-Jardetzky Distinguished Lecture on Science, Culture and Ethics

Dr. James Hansen, formerly Director of the NASA Goddard Institute for Space Studies, is an Adjunct Professor at Columbia University’s Earth Institute, where he directs a program in Climate Science, Awareness and Solutions. Dr. Hansen is best known for his testimony on climate change in the 1980s that helped raise awareness of global warming. He is a member of the U.S. National Academy of Sciences and has received numerous awards including the Sophie and Blue Planet Prizes. Dr. Hansen is recognized for speaking truth to power and for outlining actions needed to protect the future of young people and all species on the planet.

Sponsored by the Biology Department.

What do the distribution dilemmas of a local CSA farm, the ecological implications of light pollution, variations in local regulations on frac sand mining, and the new Republican administration’s environmental policies all have in common? They are all subjects of capstone research conducted by the members of this year’s Environmental Studies Senior Seminar. Learn about all of these topics and more by joining us for our end-of-semester poster session, where senior ES majors will present their final projects.