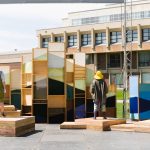 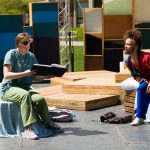 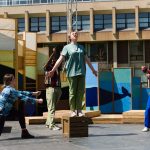 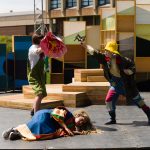 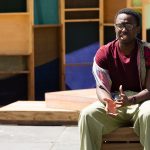 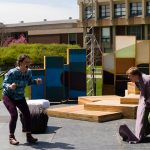 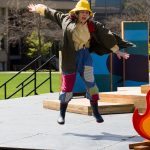 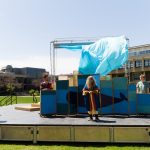 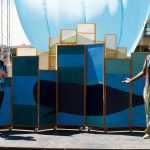 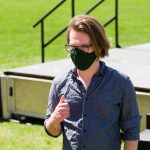 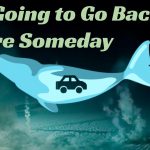 Written and directed by Asher de Forest ’21 and presented for partial fulfillment of Honors in Theater and Dance.

Garry, a young man mourning his father’s recent passing, embarks on a road trip to meet his sperm donor. Garry is accompanied by his younger sister Rachel, his girlfriend Joni, and his best friend and ex-boyfriend Mohammed, each navigating relationships, grief, and the road. Meanwhile, in Mohammed’s in-progress graphic novel, a puppet, a prophet, and a shipwrecked mariner kibitz inside the belly of a whale.

The performance contains themes of grief and loss and may not be appropriate for all ages.

he/him. Ndunzi Kunsunga is a junior Environmental Studies major with a Mathematics concentration and minors in Psychology and Theater (Yes he’s aware that’s a mouthful). Life goals include helping others and world peace. He will get back to you on the how. Obsessed with stories, he is very appreciative to be a member of this cast along with other funny folks. Favorite THDA memory thus far? Probably all of it.

she/her. Kendall Kieras is a freshman at Macalester College. She has previously held roles in She Kills Monsters, The Election, and (until it was cancelled due to COVID, Mamma Mia. In addition, she captained her school’s theater sports team for the 2019-20 school year, and last summer were a member of the Seattle 2020 Brave New Voices slam poetry team. Last year, she founded her own queer led production company, Third Charm Films, writing and directing a miniseries currently in post production. She spends entirely too much time thinking about reality tv.

she/they. Elinor Jones is a senior Theater & Dance and Music double major planning to stick around the Twin Cities theater scene after graduation. Favorite THDA roles include working with Johanna in the THDA office, Janet in The Rocky Horror Show, and Dr. Zavala in Jack Reuler ’75’s production of Distracted. She is so grateful to Asher for this gift of a play and the opportunity to grow alongside him and it for the last few years. They would like to thank the THDA department for all of the valuable experiences, as well as her friends and family for their support.

they/them. Ezra Nayagam Muthiah is a first year from Pasadena, CA, planning to double major in Theater & Dance and American Studies. They look forward to continuing to create and discover with the Theater & Dance department, and have been thrilled to be part of I’m Going to Go Back There Someday. Many thanks to Asher and the whole team for making this what it is!

he/him. Louie is a prospective Political Science major and a proud member of the Class of 2024. He is ecstatic to be a part of his first theater production at Macalester and is grateful for the opportunity to create art during these unprecedented times. A special thanks to the cast, crew, and our entire team for your commitment to making this possible. Here’s to a year of renewed joy, health, and peace for all. Enjoy the show!

she/her. Dipakshi Sarma is a prospective International Studies and Psychology double major from Assam, India. This is her first THDA performance at Mac. Auditioning and rehearsing on Zoom brought its own moments of joy, stress and hope but thanks to the marvelous cast and crew, this has been a wonderful experience. She is grateful to the team, the THDA department and loved ones who have comforted and challenged her throughout this process and the pandemic.

she/her. Amanda Jackson is a sophomore Spanish major from Burnsville, Minnesota. She is excited to perform in her first show with the Theater and Dance department! Special thanks to Asher and the whole cast and crew for creating such a beautiful community and piece of art even in these difficult times.

he/him. Asher is a senior Theater and Dance/English (Creative Writing) major from Kirkland, WA. This is his first experience directing a full-length show, which he couldn’t have done without the production team, cast, department, Harry, and many, many others (included in the acknowledgments!). Asher’s short plays include The Virgin Tony, Flood Times, and Lilith and Eve. He is currently writing his second full-length play. Asher acted in Mac’s The Cherry Orchard, Letters|Home, and The Rocky Horror Show, and stage managed Perspectives. He dedicates this production to his dad. Extra thanks and big love to Mom and Jonah.

he/they. Asa Benjamin is a sophomore Theater and Dance major, Performance Design and Technologies minor, and prospective Creative Writing and Music double major/minor. This is his first stage management experience, and he is beyond grateful to Asher, James, Tom, Johanna, and the entire THDA team for their support while he learns. They have been in two Macalester productions: Rocky Horror and Twelfth Night. Thank you to everyone joining us in this whale, and to all our lovely sailors. We couldn’t do it without you.

he/him. James Calhoun is a freshman from Pasadena, CA. I’m Going to Go Back There Someday is his first production at Mac, and he would like to thank everyone involved for their confidence and enthusiasm. James has not yet declared a major, but is eager to continue in THDA  in the coming years.

she/her. Alice Endo is a junior Theater and Dance major with a Design and Technologies of Performance minor. She is deeply grateful to Tom, Mina, Lynn, and Claudia for their mentorship in the design process. Big thanks also to Calvin for all their work on this project, to Asher for being a talented artist and kind human, and to the rest of the production team for being fantastic collaborators.

she/her. Abbee is a freelance props designer based in Minneapolis. Having grown up in Minnesota she is happy to have made her career for herself here, working on over 200 productions with 36 different companies over the last decade. Most recently her work could be seen at Theater Latte Da, Theater Mu, Penumbra Theatre, Mixed Blood theatre, History Theatre, The Ordway Center, among others. Abbee is a 2020-2021 McKnight Theater Artist Fellow at the Playwrights’ Center. She is also the props coordinator at the University of MN.

they/he/she. Amanda Gonzales is a first year student from Racine, WI who is intending to minor in Performative Technologies and Design, with a possible Asian Studies Major. This is their first production with the college and it is also their first time working with props. He is very glad to have this opportunity to work on this show with such experienced and amazing people! He cannot wait to continue to grow within Macalester’s Theater community as well as gain more knowledge, experience, and connections along the way. She would like to thank her family, her close Macalester friends, and her best friend Antonia for their continuous love and support.

she/her. Lynn Farrington began a professional career in costume design at the Chimera Theater. She has been Resident Costume Designer and Costumer at Macalester College for ever thirty years, and has designed over sixty main stage productions, numerous studio productions, and in more recent years has overseen departments dance concerts as well.

they/them. Skye Reddy is a junior Theater and Dance major with an interest in choreography, costuming, and dance filmmaking. Although they have built costumes for previous Macalester productions such as The Rocky Horror Show, this is their first time assistant costume designing. Currently, Skye is performing their own choreography at the Spring Dance Concert while also interning with Threads Dance Project in Minneapolis.

Tom has been Technical Director, guest designer and instructor at Macalester since 1990.  Tom works extensively throughout the Twin Cities as a scenic and lighting designer. Recent designs include Avenue Q and Caridad Svich/Isabel Allende’s The House of the Spirits at Mixed Blood Theatre. Tom also has designed for Skylark Opera, Stages Theatre Company, and Edge of the Wilderness Players in Big Fork, MN.

Professor Harry Waters, Jr. created the role of Belize in Angels in America: A Gay Fantasia on National Themes. His credits include Marvin Berry in Back to the Future among many television and stage appearances. In the Twin Cities, he has been seen at The Guthrie, Penumbra Theater Company, Mixed Blood, Ten Thousand Things Theater, Pangea World Theatre and Park Square, Pillsbury House+ Theatre, and Dark & Stormy Theatre. As a Professor in the Theater and Dance Department he directed Runaways, Proof, Angels in America Part I: Millennium Approaches, The Colored Museum, Tartuffe, Cabaret, The Laramie Project, a student devised piece Hip Hop Hopes, In The Blood, The Cradle Will Rock, “green: an elegy to summer” and Urinetown. Recently he directed Bulrusher at Sonoma State University and Fences at Nevada Conservatory Theatre. He is working with his son, Jordon Waters, on WING IT (inspired by the tale of Icarus and Daedalus) about fathers, sons, and sexual identity. The fall, he was appointed Associate Dean of the Kofi Annan Institute for Global Citizenship. Now Looking forward to the exploration of theatre to transform social justice issues as we support our students to be agents of change. In this covid-19 times, he co-facilitated  Offerings: Artists Respond to the Mourning, Grieving and Fires on Lake Street featuring over 35 artists in the South Minneapolis area. His next projects include community engaged events responding to  this time of social justice upheaval and healing.