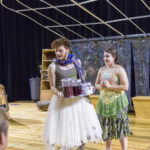 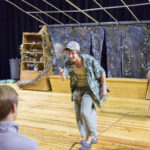 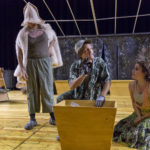 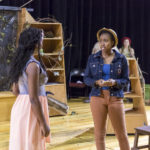 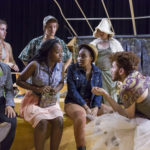 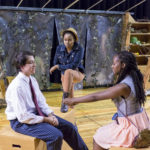 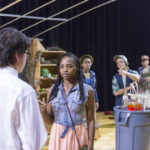 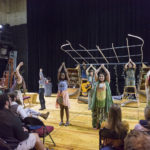 green: an elegy to summer

green: an elegy to summer is a heart pounding production set in the drought stricken near future. Joan, a bright young girl, has created a machine that purifies water. In such a desperate time, why is she running for her life? The inhabitants of a radical off-the-grid eco-commune take her in, but how long before the dangerous corporation finds her again? green, was adapted for Macalester students in collaboration with The Playwrights’ Center’s New Plays on Campus. The variation in performance locations and times aims to target a broader audience and to promote accessible theatre.

Director Harry Waters Jr., who created the role of ‘Belize’ in the world premiere production of Angels in America and portrayed the character ‘Marvin Berry’ in the movie Back to the Future (1985), has acted in and directed numerous productions around the country. Locally he has appeared at the Guthrie Theatre, Penumbra Theatre, Mixed Blood Theatre, Ten Thousand Things Theatre, Park Square, Pangea World Theatre, and Pillsbury House Theatre. At Macalester, Waters is currently teaching ‘Theatre in the Twin Cities: Dreaming the World Forward’ and ‘Acting I. He has directed productions of Runaways, Proof, Angels in America Part I: Millennium Approaches, The Colored Museum, Tartuffe, In the Blood, and The Cradle Will Rock. Last February, he was fortunate to work with several young black women in mounting a highly successful presentation of for colored girls who have considered suicide when the rainbow is enuf.

Sound designer and composer Peter Morrow moved to the Twin Cities from Dublin, Ireland, in 2012 where he worked primarily with the award winning theatre company Brokentalkers, collaborating on new innovative work. Since moving to Minnesota he has worked with many companies including New Native Theatre, Bedlam Theatre, Workhaus Collective, Stages Theatre, Swandive Theatre, Artistry and Threads Dance Company. He is thrilled to be back for green, his second production at Macalester.