Celebrating graduates Friday, May 15, 10am

Anthropology faculty invite 2020 Anthropology majors, family and friends to join us to celebrate the accomplishments of our senior majors on Friday, May 15, 10am Central daylight time. Join Zoom Meeting https://macalester.zoom.us/j/94727627535

Anthropology: Meet Olga Gonzalez
Professor Olga González is a cultural anthropologist whose research interests include the relationship between memory and secrecy, visuality and representation, vernacular/popular art, the politics of truth and reconciliation, violence and subjectivity, and Latin America.

After participating in archaeological excavations at Macalester’s Katharine Ordway Natural History Study Area, which is on the ancestral homelands of the Mdewakanton Dakota, Abby Thomsen ’20 collaborated with representatives from the Tribal Historic Preservation Offices at Upper Sioux Community, Lower Sioux Indian Community, and Prairie Island Indian Community to make interpretive signs for the land. The insights from this collaboration, which she describes in her honors thesis, are laying the groundwork for Macalester to continue to collaborate and to actively work to build reparative and just relationships with communities we have marginalized. Abby won the James P. Spradley Research Award presented annually to the senior anthropology major who has demonstrated outstanding scholarship in anthropological course work and/or research. The award comes with a cash prize of $500. This award is in recognition of Abby’s excellence in research and coursework throughout her Anthropology major. Her dedication to applying her studies to social justice issues, while at the same time working to the highest academic standards is remarkable. No doubt her passion for combining her training in anthropology with activism will continue to impact the world in manifold positive ways as she moves beyond Macalester.

Accessing summer opportunities at Mac and beyond 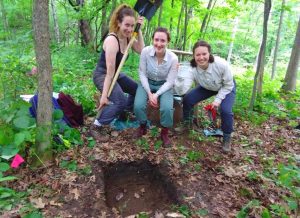 Anthropology majors Heidi Bjornlie ’18, Grace Brickner ’20, and Abby Thomsen ’20 attended a summer archaeological field school sponsored by the University of Minnesota and co-taught by Macalester anthropology professor Scott Legge and Dr. Ed Fleming from the Science Museum of Minnesota in St. Paul. According to Bjornlie, her experience at the field school provided her with “experiential learning that you don’t get at Macalester right now that is really important because it contextualizes things like our Cultural Resource Management class.” Abby was hired by the Science Museum to process the artifacts they found during the field school, including pottery sherds and lithic debris. 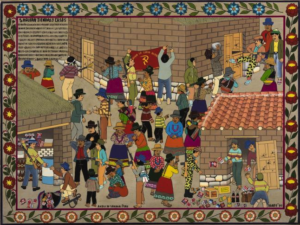 The Peruvian government’s confiscation of a collection of art from a Lima museum on the grounds of “terrorism” suggests that Peru’s legacy of violence against Indigenous communities is alive and well. An article by Olga González, associate professor in the Anthropology Department and Director of the Latin American Studies Program explains. More 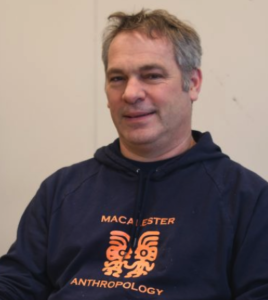 While mental health concerns were discussed in several classes after the suicide of a Macalester student in Spring 2018, students in the “Anthropology of Death and Dying” class took action. “We felt that every institution can always do better with regards to suicide prevention,” anthropology professor and co-director of the community and global health concentration Ron Barrett said. When he asked class members if they would be interested in doing something,“We all said yes,” reported Jeremy Stephan ’19, Barrett’s class developed a project to respond to the recent death, the college’s response to it, and its treatment of its students’ mental health. “Our question,” Barrett said, “was what kinds of resources are out there that Macalester could look at with an eye toward improving peer-to-peer communications and knowledge about suicide and suicide prevention.” The project looks both at Macalester’s current practices and at the practices of similar institutions. “Student teams are going out and looking at resources and other institutions and seeing what’s worked for other universities and colleges,” Barrett said. “We’re also getting a survey of the accessibility and availability of mental health resources at Macalester.” Barrett will integrate the completed group papers and add his own follow up research in order to provide a “menu of options” to present to the Macalester administration, with the hope it will lead to improved communication and tools for prevention of suicide.  -Mac Weekly 21 August 2018 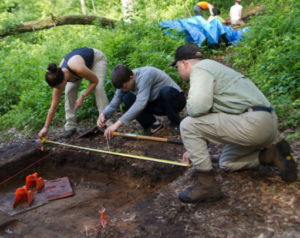 Anthropology professor Scott Legge and Science Museum archaeology curator Ed Fleming led a summer archaeology field school experience for students of the University of Minnesota and Macalester College, including Anastasia (Heidi) Bjornlie ’18, Grace Brickner ’20, Jiwen Fan ’21, and Abby Thomsen ’20.  Primary excavations took place at Macalester’s Ordway Field Station along the shores of the Mississippi River in the southeast metro, a great place to look for evidence that helps tell the story of Minnesota’s rich Native past.  The site’s location meant it was abundant in plant and animal resources and in close proximity to a river for travel, making it a good place for populations of the distant past to settle. Students learned how to conduct an archaeological survey, with careful, systematic excavation practices, and mapping and documenting finds. As they explored, they uncovered stone tools and pottery fragments and identified two new sites for future excavations. Abby Thomsen served as Research Assistant in the field and continued working with the artifacts at the Science Museum lab to preserve, study, compare, and share with other researchers to paint a picture of Minnesota’s past. 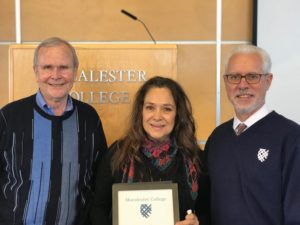 Professor Olga Gonzalez (center) received Macalester’s 2018 Jack and Marty Rossmann Excellence in Teaching Award, presented by President Brian Rosenberg (right) and Professor Emeritus Jack Rossmann (left). This award it given each year to a faculty member who has been identified by colleagues and students as exemplifying the teaching goals of the college. The award comes with a $1,000 cash prize and is announced at the annual Faculty and Staff Spring Luncheon.

Professor Arjun Guneratne: The Meaning of a Meal 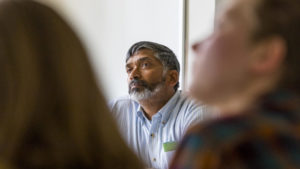 For anthropology professor Arjun Guneratne, there’s a whole lot more to food than just what’s on the plate. “It’s a kind of language,” he says, “through which we communicate our identity, our gender, our social class, our aspirations, the boundaries we set up to divide ourselves off from others, and so on. Studying human foodways takes us to the heart of what it means to be human.” That’s why, for the last three years, he’s been teaching a course called Food and Culture, which has now been incorporated into Macalester’s new Food, Agriculture, and Society concentration. It’s a Socratic-style seminar, and during Spring ’18 he and seven students traded questions about the readings, discussing how cooking shows portray gender identities. “Food plays a fundamental but often concealed role,” Guneratne told them. “How do the articles develop the idea of gender as a construct? How is gender performed in the shows?” Besides reading and discussion, there was an extra component to this course to spice things up: hands-on research involving cooking culturally significant foods. Students also completed a final project, which for most was a short research paper on a topic of their choice; however, student Karin Davey ’18 (Lake Crystal, Minn.) was working toward something a little different. Coordinating with the pastor of a local church (and a Mac alum), she was helping him develop a network between area churches and food banks to improve food access in St. Paul. “I think I’m going to do ethnographies,” said Davey, “interviewing the people at the food shelters, and asking who comes, what is missing, what do they think would make it better—trying to figure out what makes a good food provider. And then I’ll write about that.” More

Lucia Alexandrin ’17 of Gorham, Maine, has won the 2017 Mikiso Hane Prize for Best Undergraduate Paper for her senior capstone paper, “Self, Soul Loss and Motorbikes in Modern Bali.” The prize was awarded by the Midwest Conference on Asian Affairs (MCAA). This is the third time an Anthropology major has won one of the two undergrad prizes awarded by the MCAA in the last six years. Alexandrin also won the Jack Weatherford prize for best capstone.

Caroline Vellenga-Buban ‘17, from Monmouth, Ill., has been awarded the 2017 Sylvia Forman Prize for the best undergraduate paper in feminist anthropology. The Association for Feminist Anthropology, a section of the American Anthropological Association, awards the prize each year.  Vellenga-Buban’s paper, titled “Queer and Mainstream? LGBT Parents and American Family Values,” was  praised by the prize committee for the ethnographic and theoretical quality of the paper.  Since 2003, Vellenga-Buban is the fourth student from Macalester’s Anthropology department to receive the Sylvia Forman prize.

Professor Scott Legge, Risa Luther ‘16, Cecilia Mayer ‘16, and Katherine Meier ‘16 presented posters at the 85th Annual Meeting for the American Association of Physical Anthropologists in Atlanta, Georgia. Risa, Cecilia, and Katherine also presented at the 6th annual Committee on Diversity Undergraduate Research Symposium. Scott, Risa, and Cecilia presented their research on healed skeletal trauma in Old World and New World monkeys, and Katherine presented on her research in Madagascar on habituation of blue-eyed black lemurs. They presented with over 2,000 physical anthropologists from all over the world.

Professor Arjun Guneratne of the Anthropology Department, Andrea Grimaldi ’16, and Sarah Rasmussen ’14 attended the recently concluded Himalayan Studies Conference IV at the University of Texas-Austin, where they presented papers on their research in Nepal. Sarah is a former Fulbright fellow in Nepal and Andrea is completing an honor’s thesis on the impact of labor migration from Nepal on the communities that are left behind.

Dubie Toa-Kwapong ’16, illustrator Samuel Fleming ’19, and creator Nana Adom Mills-Robertson ’18 are looking to build empathy with their book, “This Land is My Land.” More

Genghis Khan and the Quest for God: A conversation with Jack Weatherford. The Mac Weekly sat down with Weatherford to discuss his controversial new book. More

A group of students spent four and a half weeks working in the 280-acre Katharine Ordway Natural History Study Area during summer ’13. “Professor Legge taught us how to do survey work quickly but soundly,” says Holt. The pottery will be sent to the Science Museum of Minnesota in St. Paul for permanent curation. more