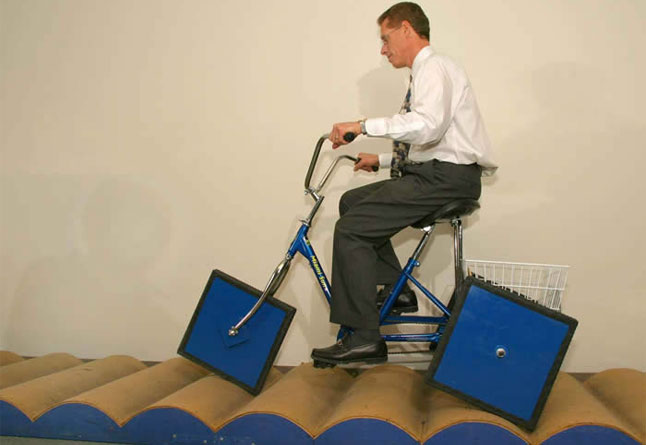 In 1997 mathematics professor Stan Wagon and bicycle mechanic Loren Kellen constructed a square wheel bike that rolls smoothly over a road made out of inverted catenaries.

The original vehicle wore out and was replaced in April, 2004. More robust materials were used and the ride is now much smoother: so smooth that one cannot tell one is not riding a round-wheel bike. The photo above shows President Rosenberg taking the inaugural ride.

Can I ride this bike?
Yes. The device is on the lower-level of the Olin-Rice Science Center and anyone can ride it.

What is a catenary?
A catenary is the shape one gets when one lets a chain or a string droop between two endpoint. Its equation is y = 1/2 (e^x – e^(-x)). This is also known as cosh x. Catenaries, when inverted, form the strongest arch — the St. Louis Arch has such a shape — and often appear in bridge construction.

Why do catenaries work for the square wheel?

In a normal bike the forward motion is proportional to the pedaling speed. Is that true here?
No. The relationship is almost linear, but not quite.

Who first realized that a square could roll in catenaries?
G. B. Robison in 1960.

What is it good for?
Near some ancient pyramids in Egypt various pieces of wood cut into quarter-circles have been found. One theory is that they were used so that large blocks of marble with square cross-sections could be easily rolled. Indeed, a quarter-circle is close enough to a catenary that this would work. In more modern terms, if you had a multi-ton cube over a catenary road, then you could roll it in much the same way that you can roll a multi-ton car over a flat road.

How far does it go in a year?
An odometer on the vehicle showed that it travelled just over 15 miles between Sept. 2004 and Sept. 2005.