Macalester students can participate in many friendly math or computer science-related competions throughout each academic year, either individually or as part of a team. These activities are described here. 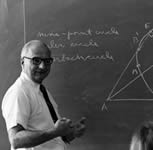 The Konhauser Problemfest is an annual problem competition for three-person teams from Macalester, Carleton, St. Olaf, University of St. Thomas, and Gustavus Adolphus. It was started in 1993 in honor of the late Joe Konhauser, a long-time professor at Macalester who was a very active problemist. The winning college gets the traveling trophy, a granite sculpture of the pizza theorem and its proof. In addition, money is awarded to the top 3 teams as follows: first place splits $180, second place splits $75, and third place splits $45.

The Konhauser is usually held in February.

Past Results and Problems

Each year, the Association for Computing Machinery (ACM) holds regional and international programming contests for students. Macalester sends two teams of three students to the regional contest each year in the second week of November. These teams are chosen during a local contest held each Fall in our advanced computing lab.

In the past, we have had student teams place high in the regional and continue on to international competitions.

See either Professor Susan Fox or Professor Libby Shoop if you are interested.

The Mathematical Contest in Modeling (MCM) challenges teams of students to clarify, analyze, and propose solutions to open-ended problems. The contest attracts diverse students and faculty advisors from over 500 institutions around the world. Students work in teams of three to develop solutions to real-world problems over the course of a single weekend. Macalester teams have done well in the past, rating “Outstanding”. Typically, problems are a great chance to hone interdisciplinary skills: applying mathematics and computing to problems from other disciplines. In 2005 the contest problems involved predicting flooding due to dam failure, and determining the optimal number of toll booths for a highway.

The North-Central Section of the Mathematical Association of America has, since 1997, organized a math contest for colleges and universities in Minnesota, North and South Dakota, Manitoba, Saskatchewan, and far western Ontario, held annually in November. In the November 2006 event, Macalester’s top team (Linh To, Anh Trinh, and Viet Hoang) placed first (tied with St. Olaf) among 58 teams from 27 institutions. They achieved a perfect score of 100, as did the winning team in 2005. In the November 2014 event, Macalester’s top team (Shuni Li, Zhaoqi Li, Zun Yin) placed first among 90 teams with a perfect score of 100.

The next Putnam Competition will be delayed until Feb. 20, 2021.

The Problem of the Week was started in 1968 by the late Joe Konhauser. Stan Wagon took over in 1993, following Joe’s retirement, posting weekly mathematics problems for students. Although now retired from Macalester, Stan still sends out problems and solutions by email, although no longer on a weekly basis.

The problems are sent out by email to almost 1000 people around the world. They are designed to be accessible to first-year college student, and very little background is needed to understand or solve them. We encourage you to try them!